Through a poster on his official Weibo profile, Wang Chuan co-founder of Xiaomi has announced the arrival of the Game Turbo mode for the Mi 8 Pro Fingerprint Edition borrowed from the Mi 9, a news that will make the most hardcore gamers happy.

This new mode, seen for the first time on board the current top of the range, allows you to improve the performance of the smartphone during the game and deals with adjusting the frequency of the CPU automatically based on the required performance. All this translates into an improved performance without impacting on consumption thanks to an intelligent management of the workload. 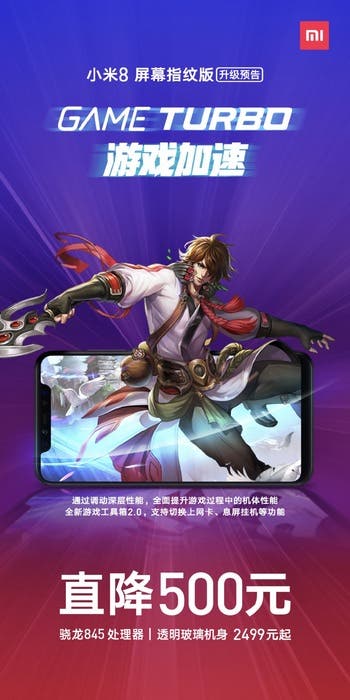 Based on what was revealed by the executive, even the Xiaomi Mi 8 Pro will receive the Game Turbo feature and for the occasion reminded that the device is on sale at 2499 yuan (about 370$) in the 6/128 GB configuration. As for the update in question it has not yet been confirmed when it will debut aboard the flagship. Also remains a question if the Game Turbo mode will be released for other models?