The last two weeks have been incredible for phones. From series of 5G compatible phones to the amazing Galaxy Fold which was then followed by Huawei’s breathtaking Mate X. Admittedly, the newly found format is still in its infancy, but could soon become a trend if initial market response is favorable. Though the Galaxy Fold and the Mate X are both not yet ready for the market, rumors suggest Samsung is already preparing two more foldables that could launch later this year, and so are other smartphones makers who have been confirmed to be working out heir own version of Foldable phones.

While Lenovo owned Motorola has confirmed it is working on bringing back the RAZR flip phone in the form of a foldable phone with a design different from the Galaxy Fold and Mate X design, a recent patent filing suggests ZTE could be taking on the alleged Razr foldable phone with device that folds vertically, and not the other way round.

First unearthed by LetsGodigital,  the patent application says ZTE has a vision for a phone with a clamshell design that sees a top section of the display fold over a large percentage of the bottom half of the device. When in the compact/phone mode, a small portion of the display remains exposed which could presumably be utilized for some quick functions. When unfolded, the device unlike the Mate X and the Galaxy Fold gets a taller, rather than broader, aspect ratio.

The ZTE foldable phone, unlike the Mate X and Galaxy Fold, however, has notches at both sides, perhaps that is where the hinges reside, making this part considerably narrower than both the bottom and the top portions of the display.

Other markings including the rear camera cutouts, volume, and power buttons are all visible, but with no provision for a fingerprint cutout, suggesting the device will either not come with one or will get the in-display fingerprint sensor. Also worth noting is the absence of a cutout for selfie camera. 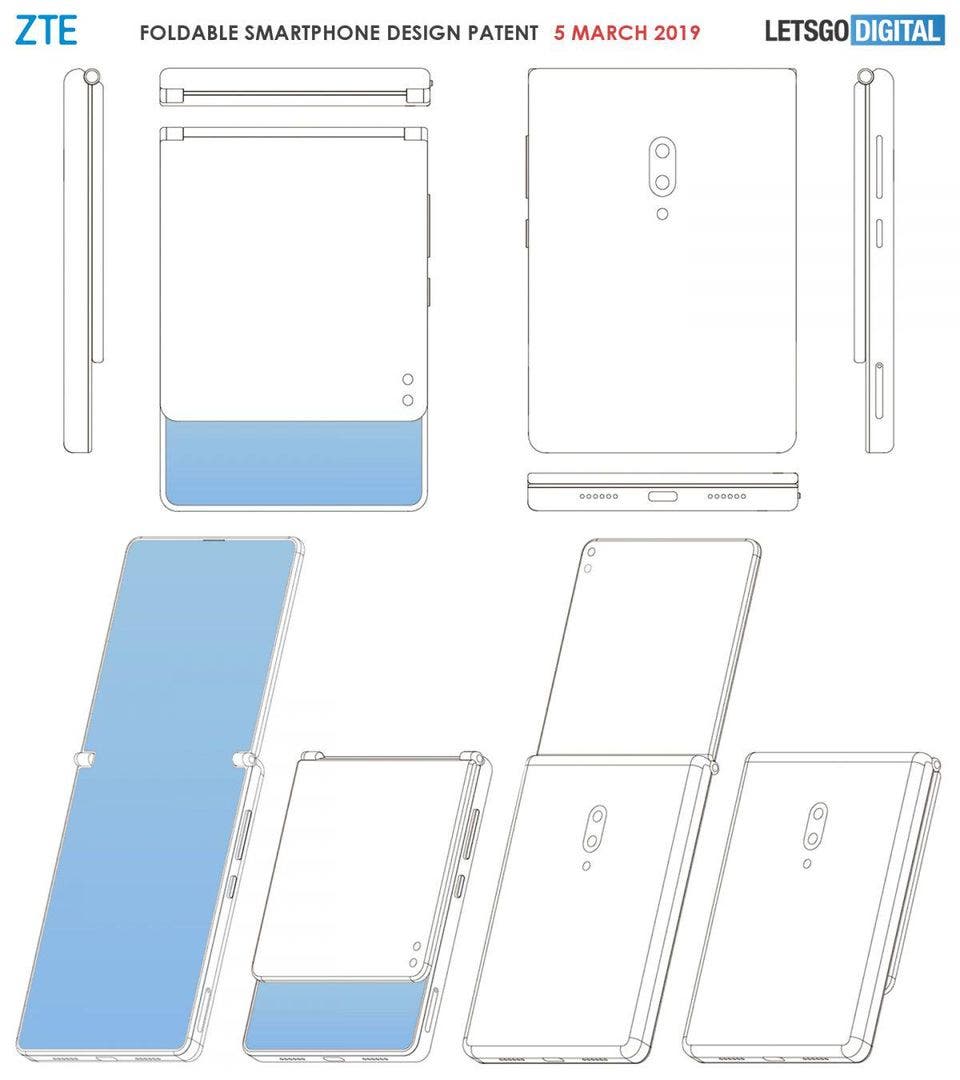 ZTE has in the past dabbled into making foldable phones with the AXON M which lacked what it takes actually to be called a foldable phone. With the right technology now in place, we hope the Chinese firm makes headway with some more interesting devices this time around. ZTE applied for the patent back in April 2018 and was posted on the World Intellectual Property Office (WIPO) site yesterday.

Previous Redmi Note 7 Got Out of Stock in India: 200K Units Sold Like Hotcakes

Next Adventures and Dreams in Los Angeles