On February 28, Xiaomi’s independent brand released its first smartphone, namely the Redmi Note 7 smartphone in India. Apart from this, the manufacturer also released the Pro variant, which comes with the main camera using a Sony 48MP sensor. As you remember, the original variant was packed with the Samsung GM1 lens. The Note 7 3GB + 32GB version is sold for 9999 rupees (about $142), while the 4GB + 64GB variant is at 11999 rupees (about $171).

Today, the Redmi Note 7 was officially listed on the Indian market. Similar to the Chinese market, Indian consumers that want to buy this phone should snap up. Lu Weibing has said the Note 7 was sold out, ‘more than 200,000 units were sold out in a few minutes.’ 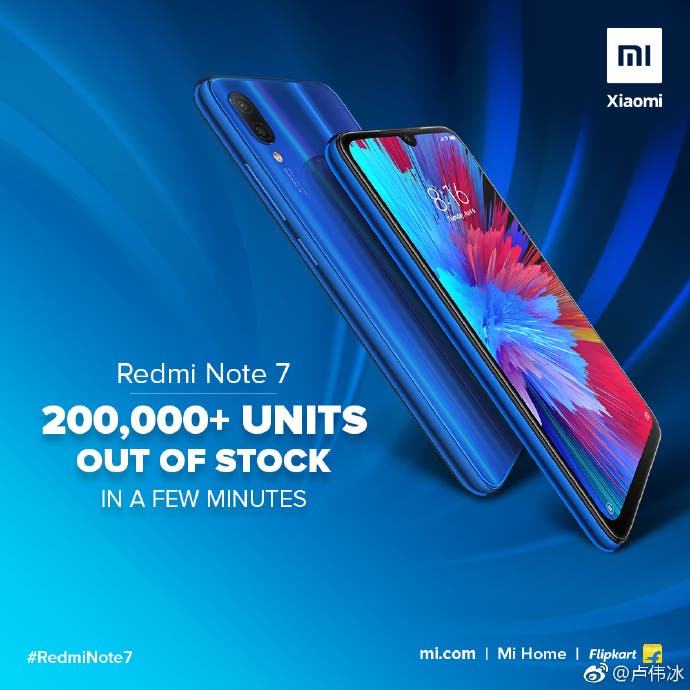 As for the Chinese market, the phone showed the same results for a few times. Though it went on sale 2-3 times, all units got a status of out of stock swiftly. It is reported the company has already managed to sell over 1 million units in the first month of sales. But what’s annoying, there are myriads of consumers that want to acquire this handset, but can’t.

Nothing surprising with these results – the Redmi Note 7 is an amazing smartphone with a decent specs list. It is packed with a 6.3-inch drop screen with a .95mm narrow frame, a 2.5D double-sided glass, the Corning Gorilla Glass 5, a rear fingerprint recognition module, a gradient back body, which has three variants of light gold, fantasy blue, and bright black. Under the hood, it sports the full-blooded version of the Snapdragon 660 chip, which is coupled with new graphite negative 4000mAh battery, supporting QC 4 protocol.

At last, its biggest selling point is the 48MP+5MP dual-camera on the back powered by AI. It also supports 4-in-1 technology, which uses this mode to take great photos in the dark environment. Of course, Xiaomi has brought the super night scene mode to this mid-ranger as well.

Next ZTE has a vision for a foldable clamshell phone, patent filing suggests