In recent days, while we were discussing the leaked information about the upcoming Black Shark 2 smartphone and guessing when it will hit the market, the manufacturer officially released a promo poster and announced when this amazing handset will be uncovered. It turns out the next-gen Black Shark gaming smartphone will be out on March 18. It also has a slogan of ‘both stable and mad/crazy’. 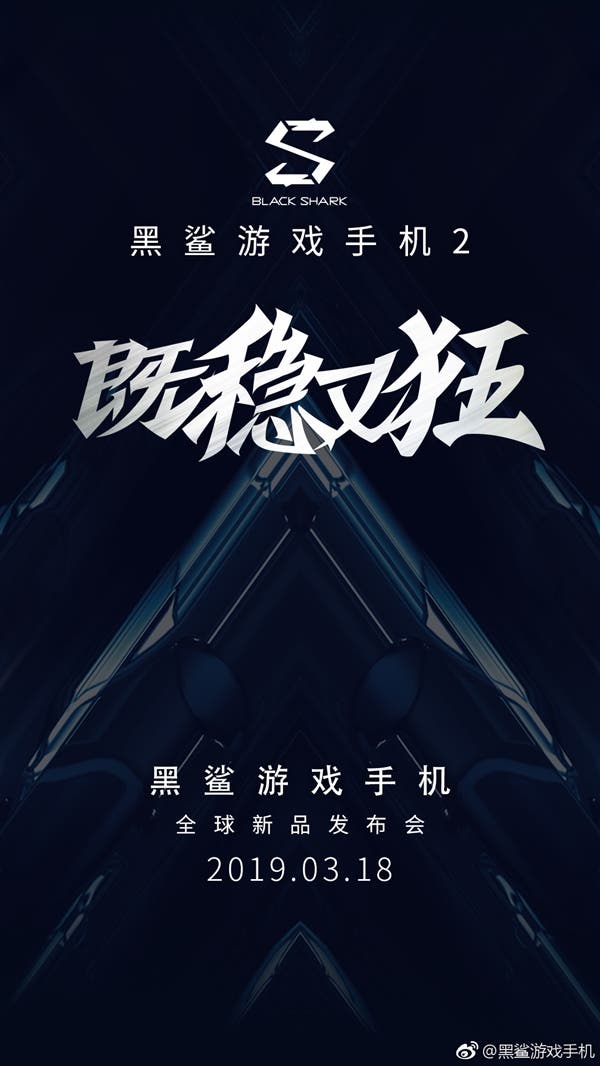 In fact, the released poster doesn’t provide much information. So we only have to rely on what we have heard previously. According to the rumors and spotted photos, the Black Shark 2 will be using the Qualcomm’s latest flagship chip of Snapdragon 855. It has also leaked in a GeekBench database, showing quite high scores. The same screenshots showcased our protagonist will be packed with a 12GB of RAM and will run on Android 9.0 system. Wang Teng, product director of Xiaomi Company, has issued a statement that there will be no Chinese smartphone maker that will come in with a Snapdragon 855-powered smartphone within two months. The iQOO phone will go on sale soon, but it won’t have a large stock.

Apart from this, Black Shark CEO Wu Shimin has confirmed that the Black Shark 2 will be launched soon, and in addition to a more powerful gaming experience, it will be also equipped with liquid cooling 3.0 technology, namely the tower-type global liquid cooling system.

The alleged Black Shark 2 gaming smartphone with a model number of SKW-A0 has also got a 3C certification. It showed the machine supports 27W fast charging option, and the charger model is consistent with that of the Mi 9.

At last, due to the spotted photo, we also know how the forthcoming Black Shark 2 gaming smartphone will look. As shown in the figure, the rear dual-camera of the machine is arranged vertically. Since the back fingerprint recognition is not seen, there is every reason to think that the new smartphone will support screen fingerprint recognition. We’ve also heard it will use a DC dimming OLED screen, a COF narrow chin, dual speakers, and other amazing features.

Previous Galaxy A90, A40, and A20e could be coming to Europe, Samsung UK outs product pages

Next Redmi Note 7 Got Out of Stock in India: 200K Units Sold Like Hotcakes