Today, Lu Weibing, vice president of Xiaomi Group and general manager of Redmi brand said that as netizens await for the official release of the Redmi Note 7 Pro in China which is scheduled to take place on March 18, the company also has a new product which will be released in the event. Many Mi fans believe that this device will be the Redmi 7 which has already passed through TENAA. If the Redmi 7 is released, it will be the third smartphone of the Redmi brand since it gained independence from Xiaomi in January. 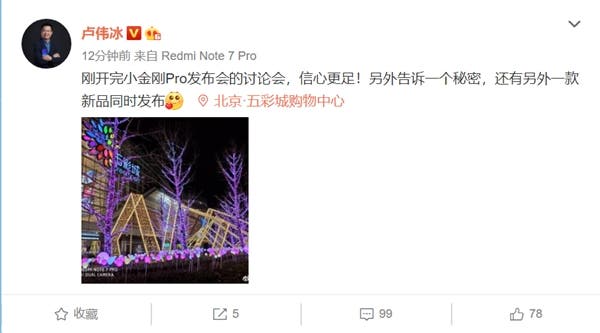 The device will come with a 4000 mAh battery as well as a rear fingerprint sensor. In the camera department, it should have a dual rear camera with a 12MP+8MP setup coupled with an 8MP selfie camera. It is expected to boot MIUI 10 based on Android 9 Pie out of the box. The Redmi Note 7 starts at 999 yuan ($147) thus this smartphone should have a lower starting price.

Previous Vivo X27 opens appointment - gets over 250,000 reservations on Day 1