Following the release of the Galaxy A10, A30, and Galaxy A50 last month at the MWC, Samsung is expected to unleash more phones in its new Galaxy A series in the course of the year. A couple of these devices have been frequenting the rumor mill, and now one of the upcoming devices just passed one of the pre-requisite release hurdles.

While the Galaxy A40 now has support page in several countries, we got an idea of the device price tag in Europe a few hours back, and now, the Galaxy A40 just bagged the FCC certification suggesting it could launch sooner than expected. While there is no schematics/renders of the device, the FCC documents hint that the Galaxy A40 will come in measuring measure 144.3 x 69.1mm with an overall diagonal of 153.0mm with a display size of 5.7-inch, making it the most compact of the new A series so far released. The device was earlier rumored to sport a 6.4-inch full HD+ Infinity-U Super AMOLED display with a resolution of 2340×1080 pixels, but we could bet our money of the FCC listing since it tends to be more official than some leaked specs. 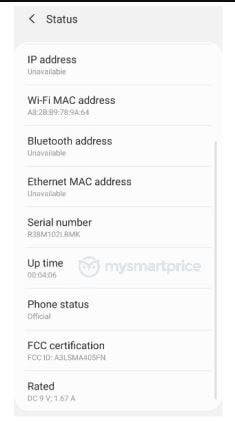 That’s pretty all we could glean from the FCC documents, some previous leaks, however, the device could launch with the Exynos 7885 SoC, while a few other rumors have it that it will come with the Exynos 7904 coupled with 4GB of RAM, U notch Infinity display, a 4000mAh battery with 15W fast charging, support Bluetooth 5.0 and run on the latest OneUI on top of Android 9 Pie.

Some unconfirmed reports also suggested the device could be priced at EUR 249 (INR 20,100 approx.) in most European countries. And while there is no word regarding the official launch date, we could be just a few days away from seeing the device, given that the company is expected to launch a new A-series smartphone every month.

Previous Apple is working on a new "affordable" iPad