We’ve known for a while now that OPPO is looking to floating a new series – perhaps a premium but affordable series, but information has been pretty scarce, and the said series/ phone remains a mystery, although we now an idea of when to expect it. OPPO VP broke the news of the impending launch of a new SD 855 powered phone earlier and has now provided more details regarding the device.

the company’s Vice President Shen Yiren has again taken to Weibo to announce the impending launch of a new series of OPPO phones called the OPPO Reno. Although details are scarce, the company did hint that the first smartphone/s under the new OPPO Reno will be made official in about a month from Today – April 10 and has even published a landing page on its official e-shop where users can drop their details to get notified when the upcoming Reno phone goes on sale. The series/device might be targeted at the teaming youth given the colorful logo released on Weibo.

While it is difficult to dwell more on the expected spec of the OPPO Reno, we can bet on the fact that we are dealing with the forthcoming flagship model of OPPO which the company and VP talked about at the MWC and earlier this month. Shen Yi, vice president of OPPO revealed on Weibo that this new smartphone will be very powerful due to the Snapdragon 855 chip. Plus, it will come with a 10x hybrid zoom technology and 4065mAh battery.

Read Also:  Oppo A57 Price In India, Key Specs Tipped Ahead Of Launch 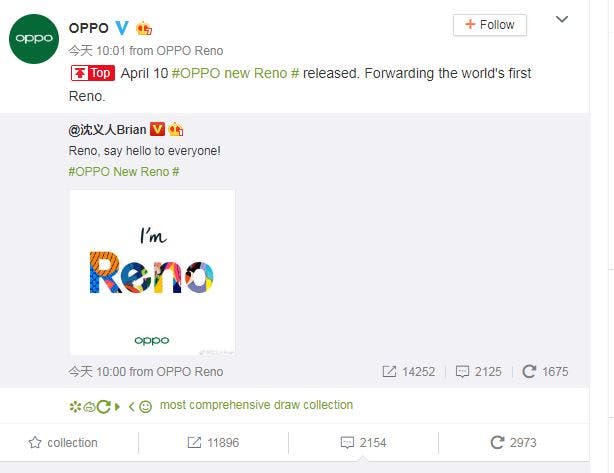 The VP also hinted that the design of the purported OPPO RENO will be top notched, devoid of bumps under the premise of ensuring the feel and thickness.  With this, you will be forgiven if you think the device might really come with a design as it has never been seen before. April 10 is still about a month away from today, so we have got enough window for more leaks and official information.

Next Huawei has no plans to sue the Australian government