At the Redmi Note 7 conference, Xiaomi founder, Chairman, and CEO, Lei Jun, announced that Redmi Note 7 comes with an 18-month long warranty. Lei Jun said that Xiaomi made great progress in its quality and the 18-month warranty is a show of its confidence in the quality of this smartphone. 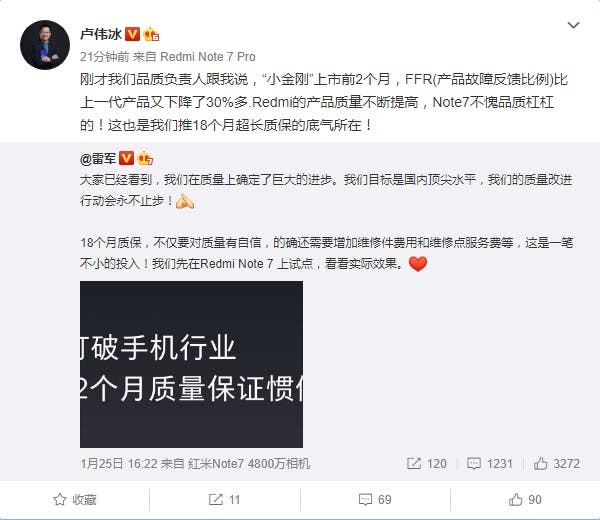 Today, after two months since the smartphone was released, Lu Weibing, vice president of Xiaomi Group and general manager of the Redmi brand, said that he just got verified information from the personnel in charge that the Redmi Note 7 product failure feedback ratio is more than 30% lower than the previous generation. He further said that the quality of Redmi products are constantly improving and the Redmi Note 7 quality is proof of that, hence the company’s ability to stipulate an 18-month long warranty.

The predecessor of the Redmi Note 7, the Pro model is expected to be released in China on March 18th. It is not known if this product will also come with an 18-month warranty like its predecessor. There are also indications that the Redmi 7 which will stand as the cheapest Redmi phone since the company gained independence will also be released on March 18. However, there is no confirmation to this thus it’s better we take it with a pinch of salt.

Previous Huawei P30 series to "rewrite the rules of photography"

Next Sony is working on another 21:9 smartphone with Snapdragon 710 SoC