Today, Huawei Mobile officials released a new poster on Chinese social Weibo. The teaser is about the Huawei P30 series and it says “Uncovering the veil of the night and restoring the true color”. This clearly implies that the new P30 series will have a pretty sweet night mode which should bring up details and colors usually lost in the dark. Sadly, there isn’t much more revealed in the teaser.

According to previous renders released by the well-known leaker Roland Quandt, the Huawei P30 will have rear three cameras, meanwhile the P30 Pro will have four cameras; the latter of which will be a TOF lens. 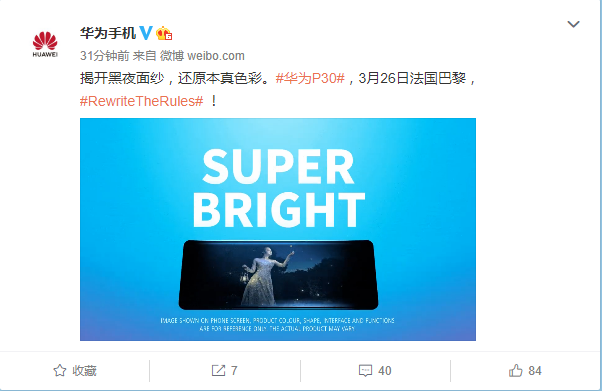 Both new models will be sporting a water drop notch at top of the screen, with an under display fingerprint scanner beneath it. This means the P30 lineup  will be the first “P”series with this newer scanning technology.

As far as specs are concerned, we know from a previously leaked AnTuTu benchmark (in which it scored 286152 points) that the P30 will be packing a powerful Huawei Kirin 980 CPU paired with up to 8GB of RAM and 256GB of internal storage. The display on the phone will have a resolution of 2340×1080, meanwhile the camera hidden in the notch at the top will be a whopping 32MP. Finally, the main rear camera will have a resolution of 40MP.

The Huawei P30 series will be unveiled in Paris, France, on March 26th, so in just around two weeks. Stay tuned for more details!