Yesterday, Lu Weibing, vice president of Xiaomi Group and general manager of Redmi brand, unveiled the packaging box of the upcoming Redmi 7 which shows that this smartphone comes with an 18-months warranty just like the Redmi Note 7. Now, Lei Jun revealed the packaging box of Redmi Note 7 Pro and Redmi 7 which shows that both smartphones come with an 18 months warranty. 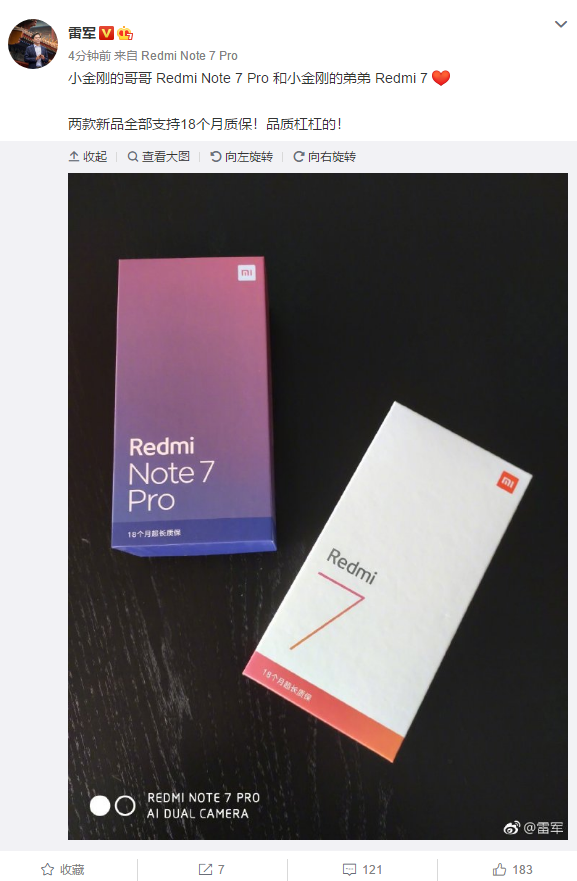 As for the Redmi 7, it measures 158.6 mm x 76.4 mm x 8.9 mm and weighs 180g. It could come in eight color variants, including black, red, blue, pink, white, green, purple, and gray. The Redmi 7 uses a 6.26-inch display with a resolution of 1520 x 720 pixels and a screen aspect ratio of 19:9. This smartphone is powered by a Snapdragon 632 (not confirmed) coupled with 2GB/3GB/4GB of RAM and 16GB/32GB/64GB of internal storage. The device will come with a 4000 mAh battery as well as a rear fingerprint sensor. In the camera department, it should have a dual rear camera with a 12MP+8MP setup coupled with an 8MP selfie camera. It is expected to boot MIUI 10 based on Android 9 Pie out of the box.