Recently, Lei Jun officially announced that Xiaomi launched the “mobile +AIoT” dual-engine strategy. He said that this will be the core strategy of Xiaomi in the next five years and the company will invest over 10 billion yuan ($1.49 billion) in the AIOT field. Today, Cui Baoqiu, vice president of Xiaomi Group and chairman of Xiaomi Technical Committee, announced the results of Xiaomi AI related patents on Weibo. According to the announcement, Xiaomi has applied for 684 patents in the AI field, and it’s patent ranking has risen from the 85th place last year to the 11th place. 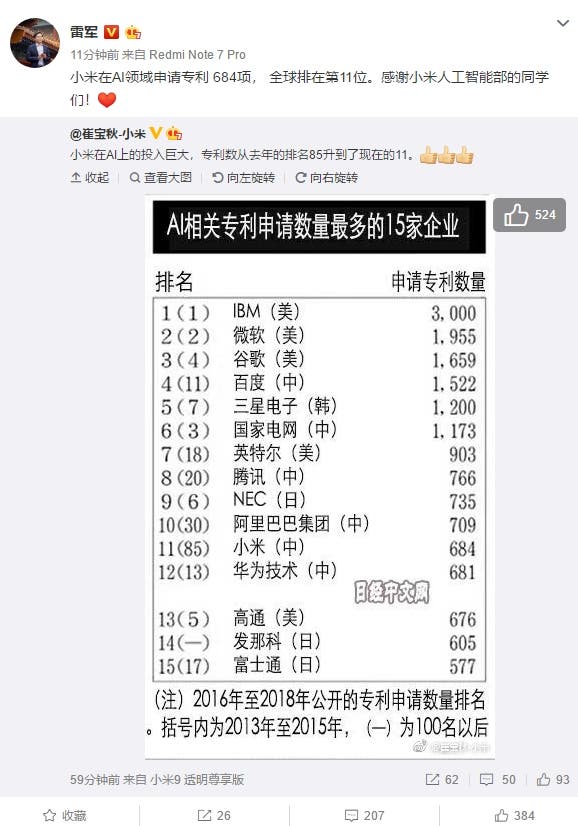 Lei Jun forwarded the news on Weibo: “Xiaomi applied for 684 patents in the AI field, ranking 11th in the world. Thanks to the students of Xiaomi Artificial Intelligence Department!”. Looking at Chinese companies, Xiaomi’s AI-related patents are second only to Baidu, State Grid, Tencent, and Alibaba.

It is reported that Xiaomi invested about 4 billion yuan ($596 million) in research and development in the first three quarters of 2018. On March 7, Xiaomi announced the establishment of the AIOT Strategy Committee. This committee was set up to accelerate the Xiaomi’s “mobile+AIoT” dual-engine strategy to promote and strengthen the overall implementation of Xiaomi’s AioT strategy.