The two less expensive, and so-called “lite” Pixel phones from Google – the Pixel 3 Lite and Pixel 3 Lite XL have been a long time coming. While leaks and rumors suggest both devices will pack the Pixel 3’s best-on-the-market camera in a more affordable device, the exact launch date as well as the expected price range continues to elude us.

The Google Pixel 3 Lite XL has again been spotted on the Geekbench database, giving us the assurance that things are moving along and a launch date might just be around the corner. While the Geekbench isn’t one to rely on for a whole lot of information about upcoming devices, the listing, unlike ts first Geekbench appearance, corroborates previous rumors which suggest one of the upcoming affordable phones from Google will be marketed as the Pixel 3 Lite XL, though we are not 100% sure we are dealing with the actual device given how easy it could be to get around data from the Benchmarking site.

The Geekbench listing confirms the Pixel device will boot Google’s latest stable OS version (Android 9.0 Pie) out of the box, and while that isn’t in any way surprising, the listing says we are dealing with a Pixel device having a dated SoC under the hood – the Snapdragon 625 SoC (MSM8953 motherboard) coupled with 3GB of RAM. 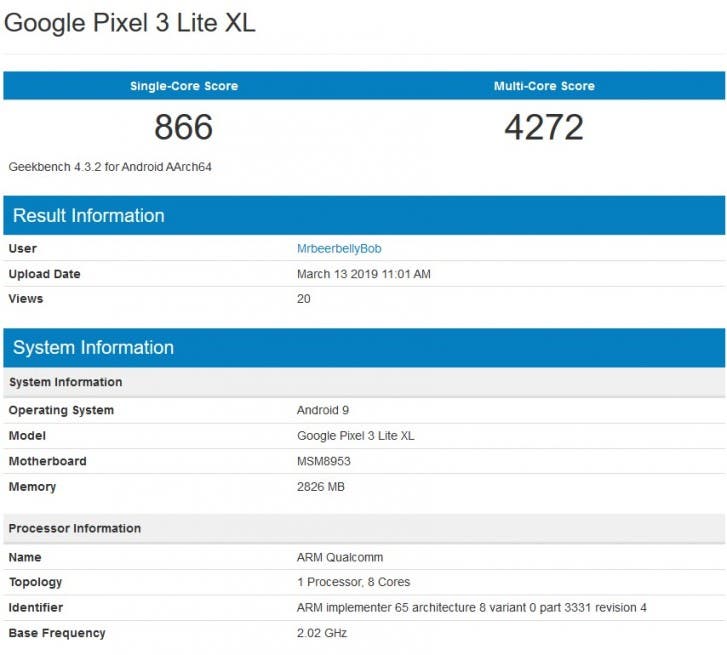 You will recall that previous Geekbench listing had the device running same Android OS, but with the more recent SD 710 SoC with even more RAM size. We are not sure if this really is just for Google’s thorough testing purposes or is the final SoC that will launch with the device.