Previously, Xiaomi officially confirmed that the Xiaomi Mi 8 Pro (or Xiaomi Mi 8 on-screen fingerprint version as some will like to call it) is about to get nine features which came with Xiaomi Mi 9. It now appears that these features are for the Xiaomi Mi 8 series. They include

Last night, MIUI General Manager @MIUI Xiaofan answered a lot of questions regarding these features. According to the official, the above functions are currently in the development version as depicted in the table. The table shows that these features are not only for Xiaomi Mi 8 Pro but the Xiaomi Mi 8 series. 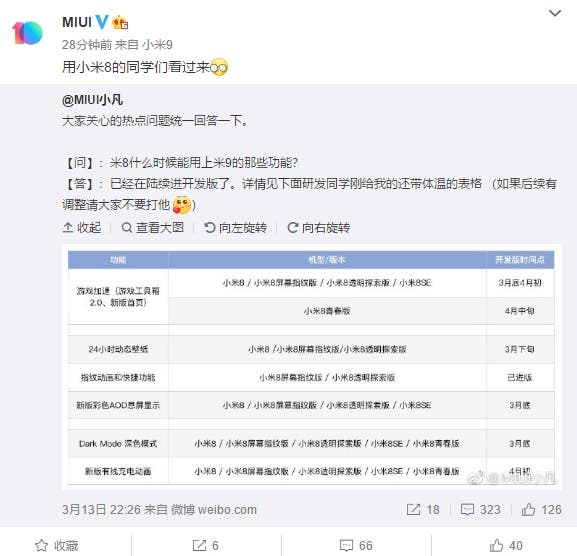 From the perspective of scheduling, the game turbo mode (Game Toolbox 2.0, new homepage) will be launched in late March/early April and the models to get this feature include Xiaomi Mi 8, Xiaomi Mi 8 Pro, Xiaomi Mi 8 Explorer Edition, and Xiaomi Mi 8 SE. In mid-April, Xiaomi Mi 8 Lite will upgrade. Through the software upgrade, the comprehensive user experience of the Xiaomi Mi 8 series will be closer to Xiaomi Mi 9. The company claims that after the upgrade, Xiaomi Mi 8 users will have no problem for another year.