Xiaomi will be disappointing many fans this year with the latest announcement from the company that the Redmi Note 7 Pro will not be available outside of India and China. Xiaomi’s Regional Director for Southeast Asia John Chen made the news official on his Facebook handle but no actual reasons for the decision were shared by the official. The Redmi Note 7 Pro recently made its debut first in India followed by a launch in China. 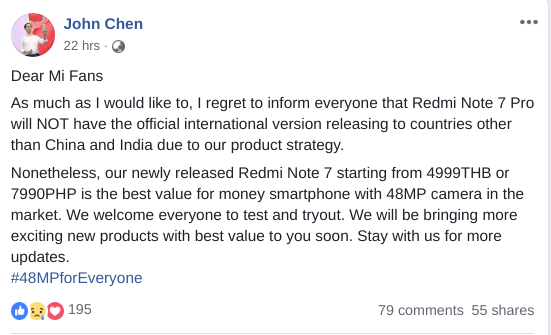 The Redmi Note 7 Pro is arguably the biggest value for money smartphone right now. Shortly after the India release, the company had already sold around 200,000+ units at first sale on March 7. The handset offers a Snapdragon 675 SoC, a 48MP Sony IMX586 sensor, a 6+ inch Full-HD+ display with a tear drop-notch design and a glass coated metal design on the smartphone with a gradient finish making it a very irresistible deal starting at just around $200. The Redmi Note 7 skips on the Sony IMX586 sensor which brings considerably great camera performance on the handset.

Now, thankfully, the Redmi Note 7 is excluded from the statement and will be available globally which means fans of Redmi Note series aren’t completely restricted from buying the series.