ASUS ZenFone 6, the next flagship smartphone of the Taiwanese manufacturer, has just appeared in the database of the well-known benchmarking platform Geekbench, where it showed the Qualcomm Snapdragon 855 Mobile Platform and 6GB of RAM.

In view of the official launch that will take place on May 16th, ASUS ZenFone 6, which had been the protagonist of several prototype sightings, returns to be talked about giving us a taste of what will be its performance.

Identified by Geekbench as ASUS I01WD, the new Taiwanese manufacturer’s flagship will be able to count on the latest high-end chipset from Qualcomm, the Snapdragon 855 which this year will be the common choice for Android tops not based on proprietary platforms. 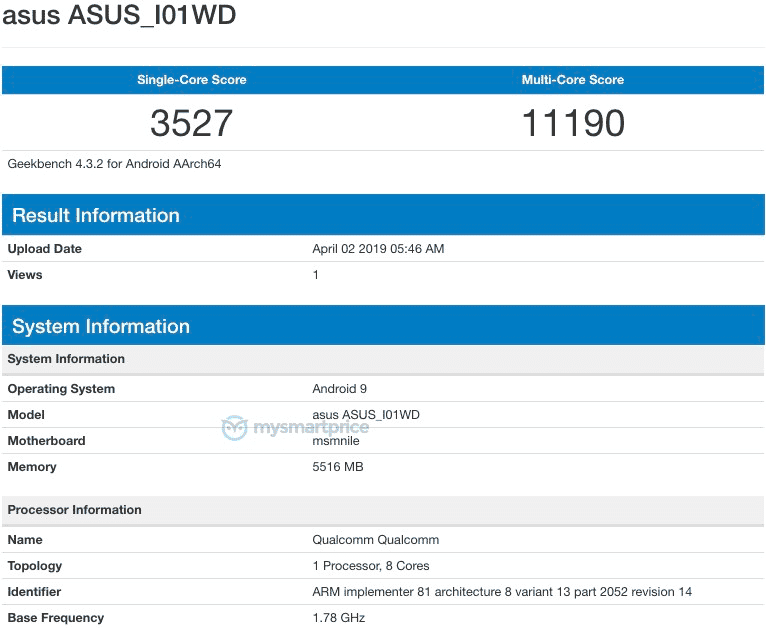 To support the mentioned SoC there will be 6 GB of RAM as mentioned, at least in the variant protagonist of this benchmark. Taking a look at the results, which you see in the screenshot above, the next flagship smartphone from ASUS has scored 3,527 points in the single-core test and 11,190 points in the multi-core test. Both scores are not surprising and are in fact in line with the results obtained from other smartphones equipped with the same chipset. As for the operating system on board of the ZenFone 6, Geekbench also confirms the obvious presence of Android 9.0 Pie.

The mentioned launch event will be held on May 16th in Spain, and probably will not have a single phone: as already happened in previous years, in fact, it is expected that ASUS ZenFone 6 is actually not just one smartphone, but a series composed of several models.

Previous New Phone Packed With Kirin 710 Leaked, Supposed to Be Honor 10i

Next POCO Launcher brings the dark theme to all Android smartphone