Indications first emerged last month that Honor could be on the verge of releasing another flagship when two devices purportedly the Honor 20 and 20 Pro with the YAL-L21 and YAL-L41 model number got the nodding of the Eurasian Economic Commission (EEC) body. other than their model numbers, the EEC documents made no reference to any specs or renders, However, we may have got wind of the potential specs and release date of the Honor 20 and Honor 20 Pro if the latest leak from China is to be believed.

According to a Weibo post detailing the specs list of the Honor 20 pro, the upcoming device is expected to pack virtually the same camera specs as the winning P30 Pro from its parent company Huawei. Specifically, the leak says the Honor 20 Pro will get the same 48MP Sony IMX600 camera sensor coupled with a 20 MP ultra-wide-angle cam and an 8 MP telephoto lens with 3x optical zoom all in the company of native software boosters like Gaming+, Link Turbo, CPU & GPU Turbo, etc

The leak also reveals that device will get a 32-megapixel front-facing camera, a 3,650mAh battery, which is nowhere near the P30 Pro 4200mAh battery, but still a tad higher than the 3400mAh on the Honor 10, and is expected to get a 22.5W fast charging, to cut down on the number of hours it takes to charge up the device. Other specs mentioned here include a 6.1-inch OLED display, Android 9.0 Pie and a minimum of 6GB RAM and 128GB storage. 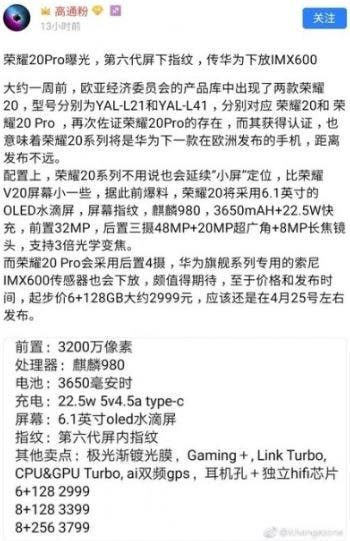 The leak suggests the device could arrive as early as April 25, though no invite has been issued yet, and is tipped to come with a starting price of CNY2,299 for the 6GB variant, while the 8GB variant is expected to cost more.

Next Nokia X71 up for pre-orders in China