With the Huawei P30 series dropping soon, Huawei sub-brand Honor is said to be preparing a couple of devices that will launch later this year. While nothing is certain, a leak from earlier this month revealed a picture/renders of the possible sequel to the Honor 10, dubbed the Honor 20. Although a possible launch date could still be months away, that isn’t stopping the leaks from pouring in, and today, the Honor 20, the pro variant and two other Huawei phones have received the EEC certification suggesting they could be the next Honor phones to land in Europe.

As per the certification documents, the Honor 20 will come with the model number YAL-L21, while the Honor 20 Pro will arrive bearing the YAL-L41 model number. Other than their model numbers, the EEC documents made no reference to any specs or renders, but thanks to a leak from earlier this month, we already have a glimpse of what the Honor 20 will bring to the table, while info related to the Pro variant is still largely unavailable.

Based on the leaks, the Honor 20 is tipped to come with AI tri-camera setup on the rear comprising of a 48-megapixel main sensor, a 20MP secondary sensor, and an 8MP tertiary camera, while it will get a 32MP selfie cam. The leaked render has no fingerprint scanner in sight, so it is possible the Honor 20 will get an in-display scanner, perhaps with Face Unlock. 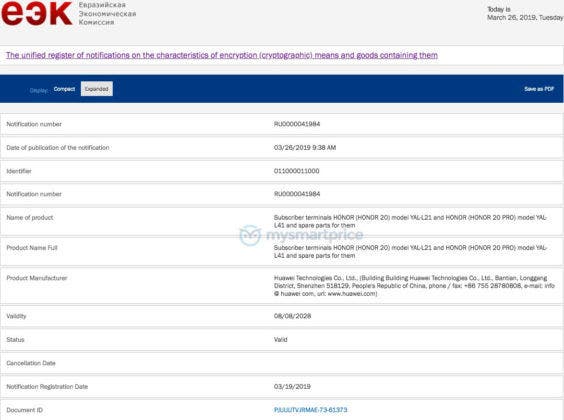 Specs and renders of the Pro variant have yet to surface, however, we expect only slight variations between both devices.

More details about the Honor 20  and Honor 20 Pro will surely surface in the coming weeks.