Geekbench just entertained an interesting visitor- an upcoming Samsung Galaxy phone that is believed to be the Samsung Galaxy A80. Rumors have been making the rounds that the Galaxy A80 might launch in place of the rumored Galaxy A90. While are yet to confirm the report, a Samsung Galaxy phone with model number SM-A805F has just gone through the pace of the Geekbench test, and it appears not as interesting as the rumored Galaxy A90, making us believe the A80 could actually not be as powerful as the A90.

While the A90 is expected to come with the Snapdragon 7150 SoC, the Geekbench listing suggests the Galaxy A80 will be powered by a SD 6150 chipset which is yet to be announced and is expected to be aided by 8GB of RAM while it will boot the latest Android 9 Pie OS. The Galaxy A80 managed to return 1,615 points in the single-core test and a multi-core score of 6732 points. These numbers fall short of what is expected of the A90, given that Samsung once revealed that the A90 will be optimized for intense gaming. 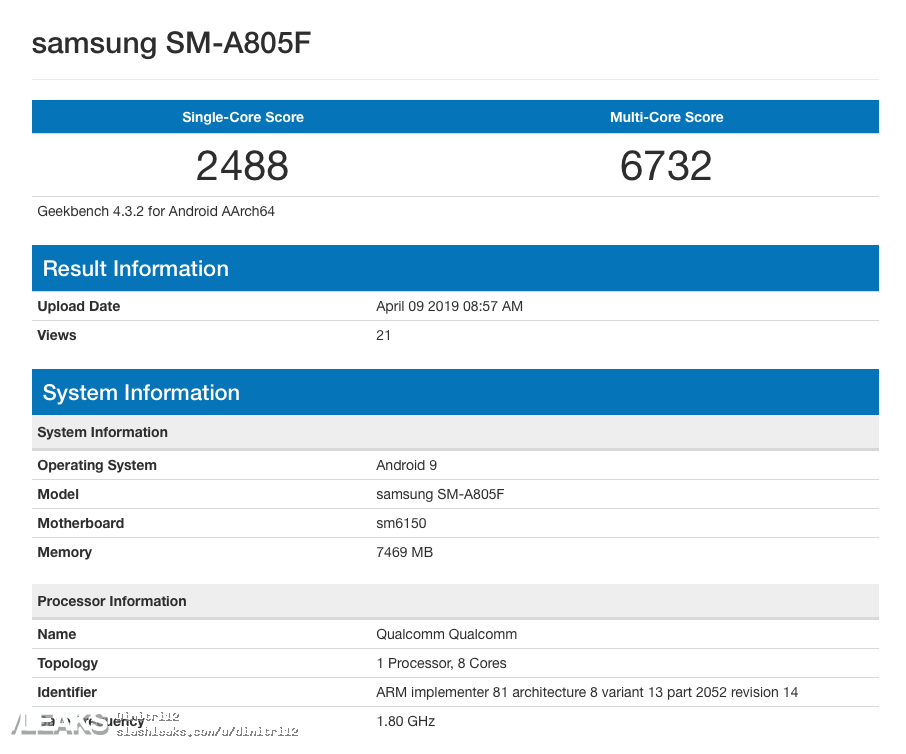 Do note that we have not seen any official report that says the Galaxy A90 and Galaxy A80 are one and the same of course, but we’ve heard rumors in the past that they might be. Clearly, there seems to be some confusion in the air, but all that will be clear to us in a few hours time. The Korean giant will be holding a simultaneous launch event in three cities –  Milan, Bangkok and São Paulo on April 10 where the A90/A80 and of course some other devices will be unveiled.

Previous 5nm process is stable: TSMC ready for the A14 chip

Next If Huawei sell 5G chip to Apple, it will be a win-win deal