In December last year, HTC made a commitment to channel its focus to making mid-range and flagship phones effective from 2019. Since then, we haven’t heard much from the Taiwanese firm who hasn’t had the best of times in terms of Smartphone shipment recently, but today, details of an unannounced HTC Phone have surfaced online in a Geekbench listing. Specs revealed here are very limited, given that the Geekbench is not necessarily the most credible source for such information, so we will be on a lookout for more details relating to the device.

According to the information on Geekbench, the HTC Smartphone with the model number 2Q7A100 will be powered Qualcomm’s Snapdragon 710 – a capable upper mid-range SoC that was just recently trounced with the arrival of the Snapdragon 730 SoC. The SoC is expected to be backed by a 6GB RAM, while it will boot Android 9 Pie out of the box. 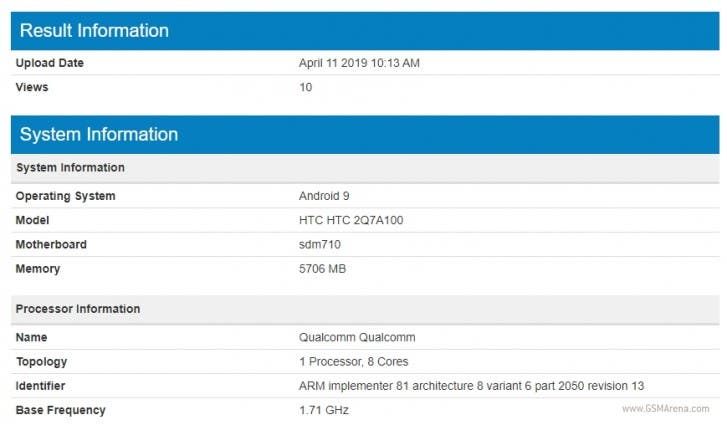 That is about all we know about the device for now, and while we are not certain when the device will launch, it is plausible it might take a while before we finally get to see the device,  given how little has been leaked about the device so far.