After an exclusive appearance on YouTube channel Technical Guruji yesterday, the Realme 3 Pro has now been spotted on Geekbench with model number “RMX1851″. Realme CEO Madhav Sheth answered a lot of questions in yesterday’s short video and also dropped some hints about the upcoming Redmi Note 7 Pro competitor. And the Geekbench listing once again confirms what the Realme India head seemed to state implicitly. Moreover, a Bluetooth SIG listing has also confirmed key specifications like screen size, battery, connectivity options, and more. 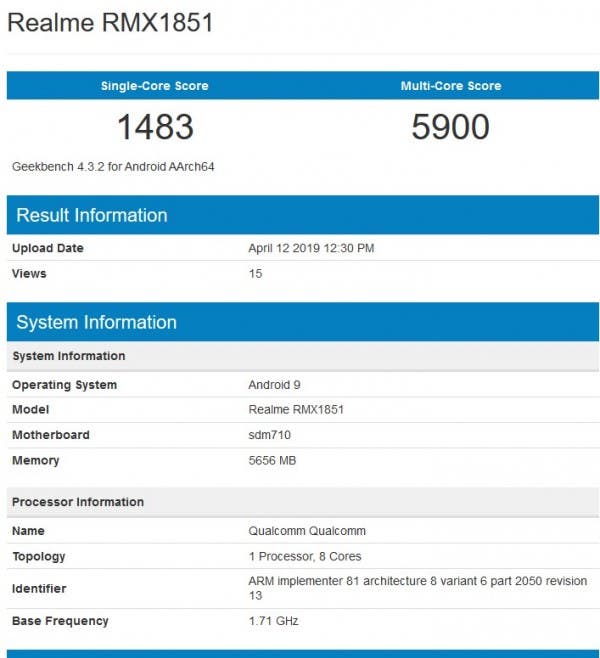 The Geekbench listing suggests a Snapdragon 710 SoC will power the Realme 3 Pro and there will be a 6GB version too while Android 9.0 Pie will probably be on board all versions. Moving over to the Bluetooth SIG listing, it also shows up the same RMX1851 model number. It hints at a 6.3-inch FHD screen, a 3,960mAh battery, support for dual-band (5GHz) Wi-Fi, and a fingerprint reader. There’s no mention of a fast charge feature though. Moreover, leaks have hinted at a Sony IMX519 sensor for the rear camera of the handset, the same sensor which also exists on the OnePlus 6T.

The launch is on April 22 when the company will reveal one more device aside from the obvious Realme 3 Pro. Let’s see what Realme has to offer this time around.