Chinese Smartphone maker VIVO only a few weeks back unveiled a couple of smartphones with the Pop-up camera, and the new VIVO IQOO, and is now set to release yet another device, this time not in the premium or mid-range segment, but in the budget segment. Reports making the round has it that the firm is on the verge of releasing the sequel to the VIVO Y15 as a new phone allegedly called as VIVO Y17 has been spotted online, along with all its specifications and features.

While we are not sure when the phone will debut, leaked renders/image shared by 91mobile via a retail chain channel suggest the device will get a rear fingerprint sensor coupled with a tri-camera setup with LED flash, while there is a waterdrop-style notched display with slim bezels on both sides, and a chunk of it below the display.  The leak has no detail of the tri-camera setup, however, it mentioned there will be a 20MP front camera. 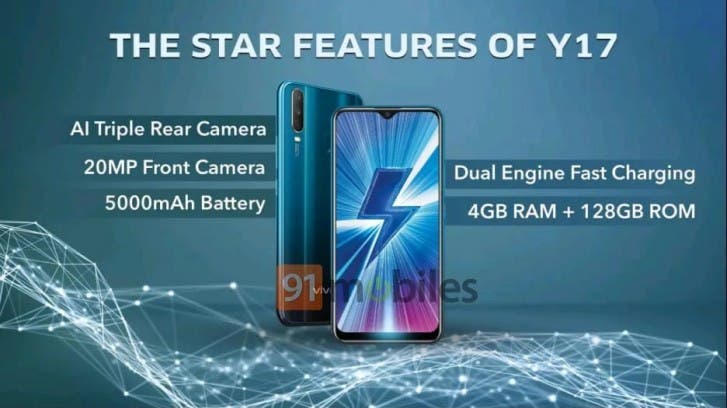 The VIVO Y17 is tipped to come fitted with a 6.35-inch screen with the  Helio P35 SoC under its hood. It will reportedly come in a single variant – with 4GB RAM, and 128GB storage as well as a massive a 5,000 mAh battery with dual engine fast charge.

Next OnePlus set to announce something important tomorrow, likely the OnePlus 7 launch date