For OnePlus enthusiasts, the new research brings good news. For the first time in its brief story, the Chinese company reached the top 5 reaching 2% of the premium smartphone market. OnePlus and its fellow Chinese OEMs such as Huawei and Oppo have all expanded their presence, while other mainstream companies such as Samsung and Apple lost some share in exchange.

The Cupertino based OEM still dominates this range with a 51% share, followed by Samsung and its 22%. In the third place, we can see the ambitious and growing Huawei with its 10% share. The Chinese OEM experienced a 97% year on year growth due to the strong sales of Huawei P20 and Mate 20 series. Oppo achieved a decent 6%, while OnePlus was the fastest gainer in the segment, thanks in large part to the record-setting sales in India. 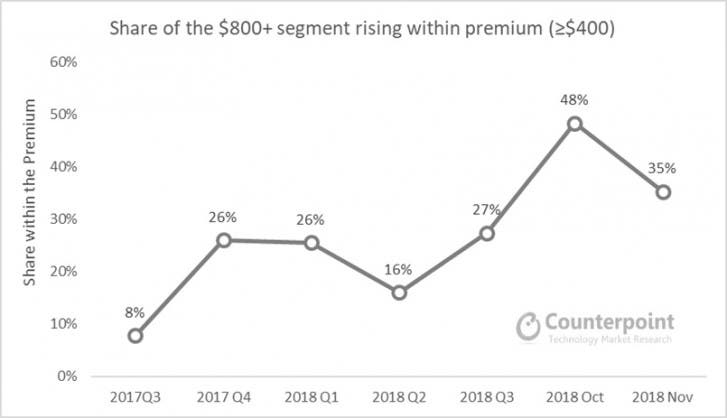 The ultra-premium segment ($800 and up) was the fastest growing one, there Apple’s dominance is most pronounced – it accounts for nearly 80% of the phones sold. Curiously, this particular segment is where buyers are more content with paying more for devices as long as they will be able to use them over a longer time period. This slice of the market is expected to see further growth due to the arrival of 5G and foldable smartphones.