Since the introduction of Android Q, Google seems committed to finally deliver a full “Dark-Mode” experience to Android users. Besides finally offering a system-wide dark mode with the 10.0 version of Android, the search giants is adding a darker interface to many of its applications before the official debut of Android’s next version.

With the arrival of Material Design, our eyes started to feel strained at the end of every day. After all, Google’s interface that was introduced with Lollipop uses plenty of bright white background, it can be blinding to look at night or in a dark room. Not only this light can be hurtful to user’s eyes, but also annoying to other people in the same dark room.

After five Android versions, seems that the giant of searches will be finally hearing user’s outcry by implementing Dark Mode on its framework and through several apps of its platform. The Dark Mode will change the appearance of an app from having black text on a white background, to show white text on a black background. This feature can be configured to only be active in some specific hours, although many users will opt for using it all the time. 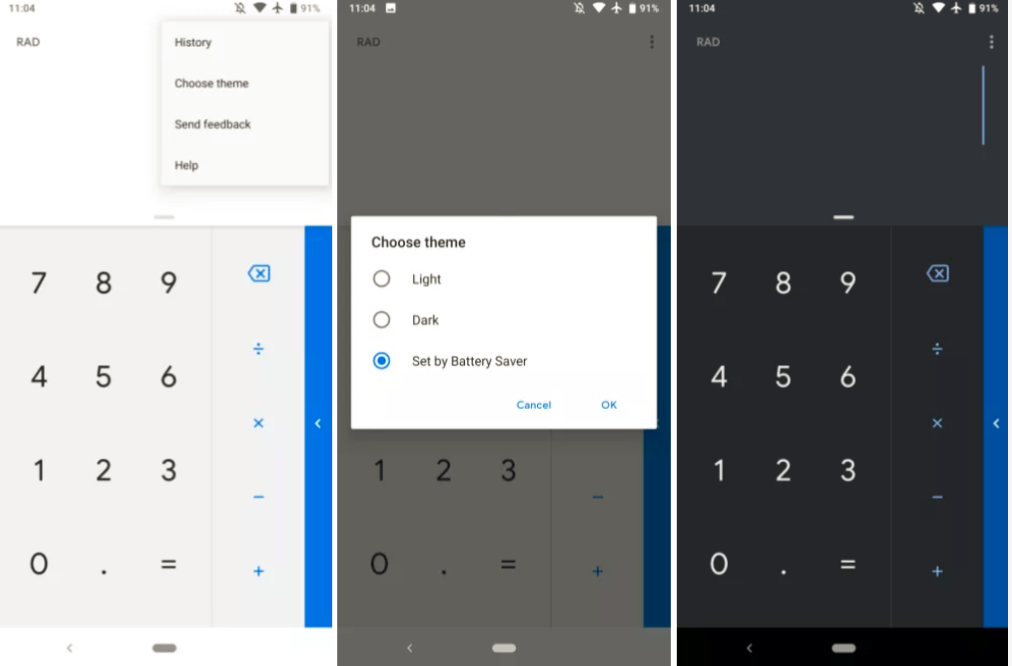 According to the folks at 9to5google, Google’s latest app to receive a Dark Mode treatment is the Google Calculator app for Android. This is a must-have feature for the calculator, which has a huge white box that covers the top 40% of the screen. Dark mode can be found in version 7.6 of the utility app, and unfortunately, Google Play Store only offers the 7.5 version at the moment. Once that the newer version hits the Store users will be able to update or download the new app with the fully functional dark mode. Once the new version of teh app is installed on your Android device, you can set the theme via the three dots app menu. Through the Choose Theme section you can select from the regular retina melting Light theme, Dark theme or Set by Battery Saver. The latter option will set the Dark Mode only when the Battery Saver feature is active.

Android Q is set to debut sometime in August or September, but we may know more about this particular version of Android in the next week, during the Google’s I/O which is set to happen on May 7.

Next Research claims that Google Assistant and Siri are equal