The Google Pixel 3a and Pixel 3a XL have been surrounding the news since the end of last year. After a number of rumors and leaks, the devices are finally going to become a real thing during Google’s annual developer conference, I/O, set to happen on May 7. As we’re getting closer to the date the leaks are becoming more intense. Last week we’ve seen the smaller handset in both White and Purple Hue colors, today, the very same Pixel 3a decided to pay a visit to GeekBench database. 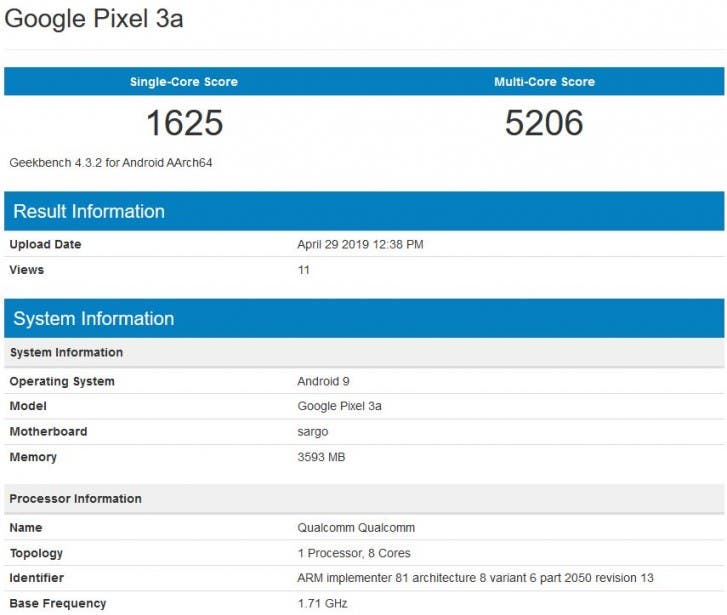 The phone unsurprisingly runs Android 9 Pie straight out of the box. It counts with 4GB of RAM and is powered by an Octa-core Qualcomm Snapdragon chipset. According to recent rumors the XL variant may ship with the Snapdragon 710 at the helm, one time that the results are above the ones achieved by Pixel 3a, we can pretty much affirm that this smaller variant will come with a lesser SoC under the hood. It could be the Snapdragon 670, or even the Snapdragon 675.

According to a past leak, the Pixel 3a’s screen resolution will be stick to 1080×2220 pixels, while the overall display’s size is expected to be around 5.6-inch. In days of smartphones with 6-inch and more, the Pixel 3a will surely be an attractive piece for compact phone lovers. All these details will be confirmed in the next Tuesday, May 7. However, more leaks should emerge through the course of this week, so stay tuned for more details about Google’s Pixel “budget” duo.