South Korean manufacturing giant, Samsung, is one of the leading smartphone companies in the world. Recall, that Samsung has a lot of issues with the Galaxy Fold which it recently released. However, this has not stopped the Korean tech giant from laying out some other bold ideas. Last week, a new patent from Samsung with an ambitious smartphone concept appeared online. The patent shows a display that completely wraps the entire phone. 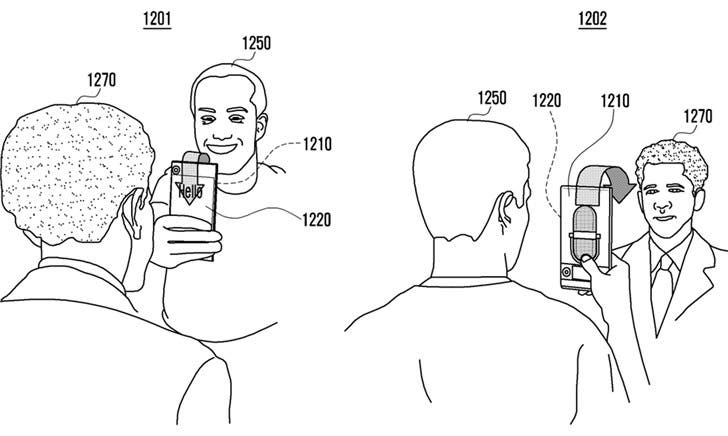 This is only a patent application and does not come with actual photos or videos showing the operating principle. However, there are a bunch of illustrations that let us know how the phone display might work. From the drawings, it appears that the rear camera can also be easily used as a self-portrait for higher quality. This means that when taking pictures of other people, the subject can see the framing of the camera lens. Samsung also gave an illustration of two people talking face to face, and language barriers were resolved by phone. It seems that users can use the phone to translate conversations of two parties into different languages ​​on the screens which are on both sides of the phone.

Since the display wraps around the phone, there will be a small area at the top of the phone to show notifications. The user can theoretically see the notification at the top of the phone and slide it down to reply. However, as interesting as this sounds, there is no indication that the display is foldable. It must be noted that applying for a patent does not mean that Samsung will actually release such a mobile phone. Nevertheless, it can be seen that Samsung has some big design moves in its pocket after the Galaxy Fold hype. To say the least, this device may never see the light of day.