The Redmi Snapdragon 855 smartphone is arguably the most anticipated smartphone in the industry for now. To make matters worse, Redmi has been quite stingy with the specs of this device and we keep confirming what to expect in trickles. As a result, netizens have not made it easy for Lu Weibing, Redmi’s general manager because he gets questions regarding the Redmi flagship every day. In a photography challenge organized by Lu Weibing, a user asked: “I’m that the Redmi flagship would join the super wide-angle lens.” Lu Weibing responded “yes”. That’s one feature down, we now know that one of the rear cameras will be a super wide-angle lens. 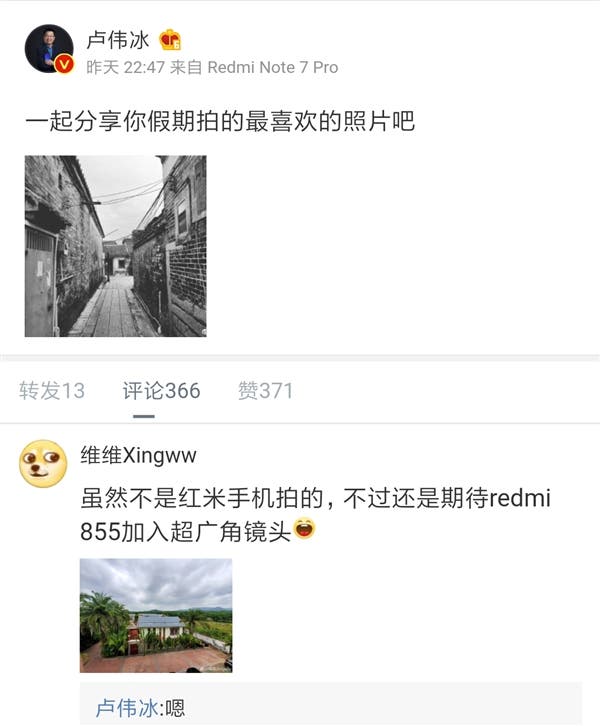 According to speculations, the Redmi Snapdragon 855 smartphone is expected to be equipped with a similar camera setup as the Xiaomi Mi 9 SE. This includes a 48MP + 13MMP + 8 MP configuration, of which the 48MP main lens is a Sony IMX586 sensor which supports handheld super night scene mode.

In the core configuration, the Redmi Snapdragon 855 smartphone will be equipped with a Qualcomm Snapdragon 855 flagship platform which is built on the 7nm process technology, adopting a new three-cluster eight-core architecture. Specifically, it has 1 × 2.84GHz super large core + 3 × 2.42GHz large core + 4 × 1.8GHz small core composition. It uses an Adreno 640 GPU and the AnTuTu score is up to 380,000.

Next OnePlus 7 Pro will cost so much compared to its predecessors: leaked prices and colors for India