The launch of Huawei P30 Pro has generated a lot of discontents by some Chinese consumers, who have recorded benchmark results that are significantly lower than expected by AnTuTu.

Through various posts on the Chinese platform of Weibo, these consumers confirmed that they had registered scores close to 238 thousand points on AnTuTu, much lower than the results achieved with the same benchmarking tool from any smartphone with Snapdragon 855, the direct competitor of the Kirin 980 of Huawei P30 Pro. 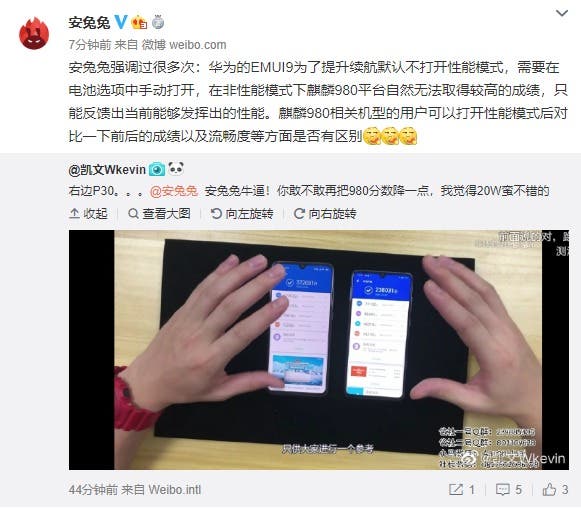 With regard to these complaints, AnTuTu confirmed that the EMUI 9 installed on Huawei’s latest smartphones does not activate performance mode by default, thus sacrificing performance to offer better autonomy.

In fact, by activating the performance mode through the settings of Huawei P30 Pro and re-running the test on AnTuTu, the results obtained should be in line with the scores we expect can reach a portentous chip like the Kirin 980.

It is worth to mention that Huawei has released a new limited version of the smartphone, known as Huawei P30 Pro Special Edition in China and today we can see the first images of the Special Edition, whose packaging and accessories are quite different from those of the standard edition.

Next PUBG Mobile replaced by Game For Peace in China