Canalys – the reputed consulting firm has just published its calculations for the North American smartphone market for Q1 2019 and so far it seems terrible. Overall, the market reached a five-year low, with total shipments of 36.4 million units.

The results represent a decline of 18% from Q1 of 2018, but things aren’t so bad for all companies. Samsung, for example, managed to grow its market share from 23.2% in 2018 to 29.3% in Q1 2019. However the rise wasn’t something that is only related to a surge of Samsung smartphones in Uncle Sam territory, but due to the market fall, overall the company experienced a sales growth of only 3%. The South-Korean saw its 10.3 million units from last year in Q1 rising to 10.7 million between the first three month period of 2019. 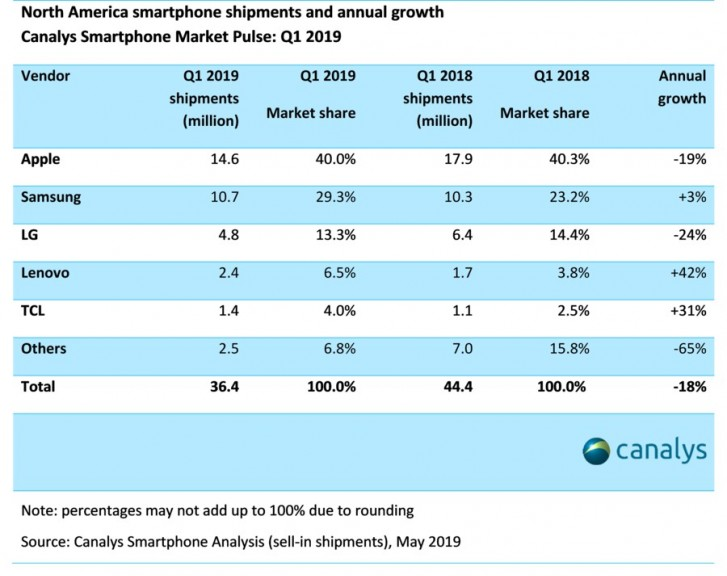 Of course, if we are going to credit one of Samsung smartphones, its success in recent months is mainly related to its new Galaxy S10 flagship line. In fact, the top three smartphones that made up 25% of U.S. shipments in Q1, and two of those were from Samsung – the Galaxy S10+ and S10e, both grabbed a 6% slice of the entire market, moving 2 million units each. With 4.5 million shipments the iPhone XR is the leader though, accounting for 13% of all sales in Q1 2019. 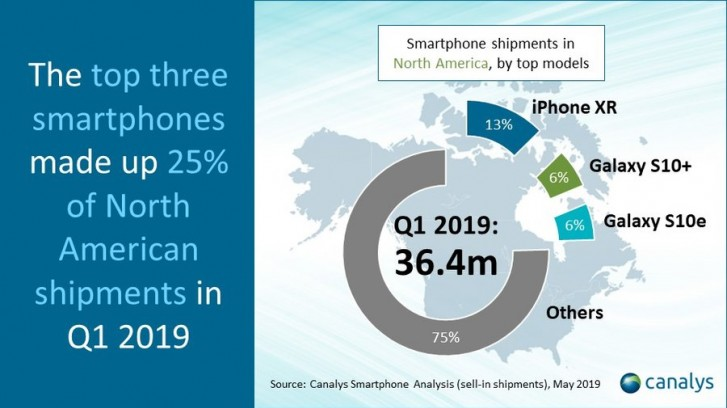 Apple still is the leader of its domestic market with 14,6 million shipments and 40% of market share. These numbers are a bit below their respective results in 2018 when the company shipments reached 17.9 million and it’s market share was 0.3% above the current result.

Canalys put in the third place, another South-Korean company – LG. That’s a bit odd considering how bad the company is performing in the global scene. Lenovo follows in No.4 position, but that’s due Motorola shipments since the company still is highly popular in the region. In the fifth position, we have TCL, another surprise.

Previous TSMC will be mass producing 5nm chips in 2020; development of 5nm+ started