In a recent product launch conference held in Beijing, Pete Lau, founder, and CEO of OnePlus, announced that the company has entered the top 5 in the global high-end mobile phone market. The list shows that the top four in the world are Apple, Samsung, Huawei and OPPO. 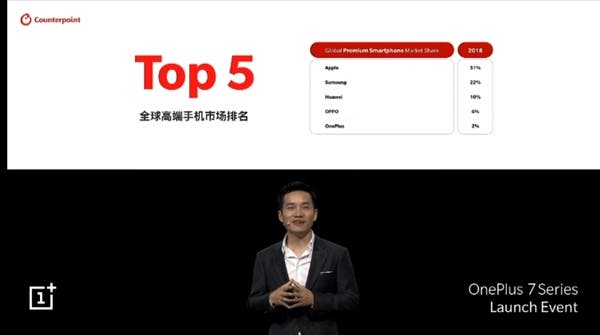 Pete Lau said that 2019 was the sixth year of the establishment of the company, and it has entered the top five in the global high-end market. OnePlus CEO believes that the company has come a very long way and this is the reward for all its hard work. He said “this is the recognition of the industry and the trust of each “refueling”. At this moment, I have loved this industry for more than five years, and I am very grateful for the support that we have been getting…”

In the past six years, OnePlus has introduced OnePlus 1, OnePlus 2, OnePlus 3, OnePlus 3T, OnePlus 5, OnePlus 5T, OnePlus 6, OnePlus 6T, OnePlus 7 and OnePlus 7Pro. In total, the company now has 10 flagships with one mid-range model. The company also released the Chinese version of the OnePlus 7 series as well as the prices of these smartphones in China. With the arrival of OnePlus 7 and 7 Pro, some new software features have arrived too. The new OxygenOS has been armed with new features such as the Screen Recorder, Nightscape 2.0 and Zen Mode, among others. Do you think that OnePlus will have a good grip on the high-end smartphone market? Let us know your thoughts in the comments below.

Previous Pavel Durov of Telegram has no doubts: WhatsApp will never be secure