Samsung promised to revive its budget segment with smartphones that are decent and compelling for customers, with plenty of features that in the past were only found in the Korean’s flagships. The company’s new strategy is proving to be a success with its Galaxy A-series reaching 5 million sales in India alone. One of the company’s most interesting handsets the Galaxy A50 has just received a new OTA update. 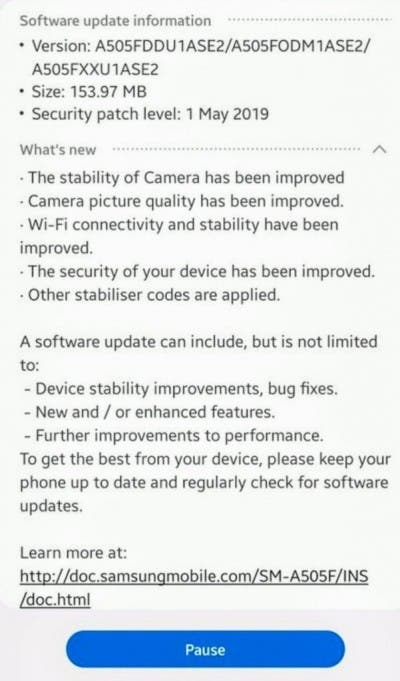 During the last month, The Galaxy A50 was contemplated with its first OTA update with improvements for camera and fingerprint scanner. Now a new update A505FDDU1ASE2 update introduces even more camera enhancements as well as Wi-Fi refinements. Worth noting that it also introduces the May security patch.

The update is now rolling out in India and weighs in at 154MB. Since this is a small incremental update don’t expect to see big changes with this new OTA release. The Galaxy A50 sits as good offering with a super AMOLED 6.4-inch display with a teardrop notch housing a 25MP selfie plus a triple-camera setup (25MP+8MP+5MP) on the rear and a large 4,000mAh battery for $315. The handset ships with Android 9 Pie straight out the box with Samsung’s recurring OneUI running atop.

The device is pretty doing well in emerging markets, the company has recently cut the price of some of its new offerings in India, in order to keep up with the competition. If Samsung wants to keep this good reception for the A-series they should keep pace on this software support.