Having introduced its flagship line, Samsung is already preparing to release the Note 10 line late on this year. In the middle of the way, the company has been trying to keep other devices of its portfolio updated, and running its new software interface – the One UI. After introducing the new design language to several of its smartphones, the Korean maker is now updating some of its smart wearables – The Galaxy Watch, the Gear Sport and the Gear S3 are the latest devices to join One UI bandwagon.

The Galaxy Watch was released last year along with the Galaxy Note 9, however, the Gear S3 is a three-year-old device so it’s memorable to see Samsung providing such update for a device of this age. Aside from the new design language that’s more in line with the One UI on mobile devices, the new update introduces a couple of new features for the smart wearables.

The company added a new outdoor swimming mode, high heart rate alerts and a so-called Daily Activity feature that give to users a short summary of overall activities and current progress during a day. 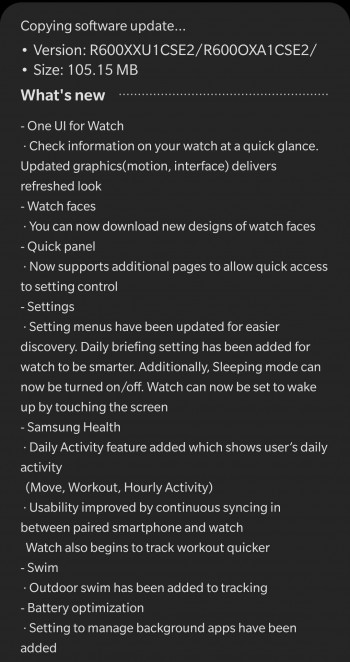 Along with the new features, the update also includes some small changes to the wearables’ software. Now the act of touching the display is enough to wake up the watch. Furthermore, it brings more options for managing background apps and Samsung is bringing new watch faces that were launched with Galaxy Watch to the older models as well.  The update does include improvements for battery life, moreover sleep and exercise tracking are now more accurate and activate faster.

Since this update is rolling out in a gradual form, it may take several days to reach all devices, so if you haven’t been contemplated by the update don’t worry and wait a little longer.

Next More Honor 20 Pro camera samples emerge ahead of launch