The month of May is giving us more surprises than we could imagine, starting with the beautiful Redmi K20, passing through the launch of Realme 3 Pro in various markets and the new OPPO K3. In the meantime, Vivo has not been idle and is preparing to launch a smartphone that looks really good, both in terms of specifications and design. Vivo Z5x has made its appearance on Antutu and in the meantime, the Asian company continues to confirm the specifications that we will find aboard the mid-range.

As for the Antutu benchmarks, the device appears with the abbreviation V1911A, already seen in some live images. It is therefore the Vivo Z5x, which has totaled 173,798 points on the benchmark platform, with both Snapdragon 710 and 8 GB of RAM. This result seems slightly subdued – compared to the memories on board the smartphone; probably it is a trial version, perhaps immature on the software side. 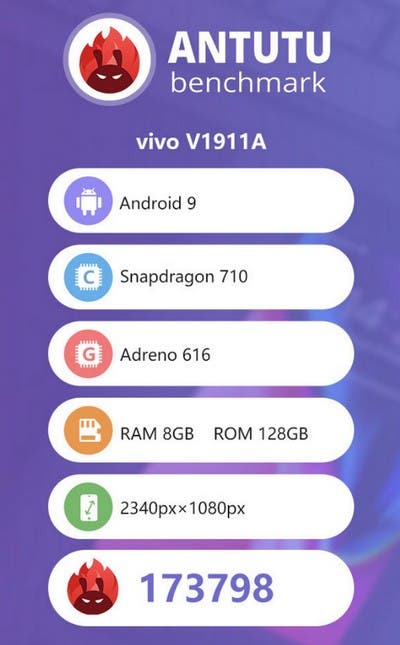 Despite these “doubts”, the new Vivo remains a very interesting device especially because of its 5000 mAh battery. The official renderings published by JingDong also confirm the presence of a triple camera, like almost all new smartphones in the mid-range segment.

It is worth to mention that the upcoming vivo Z5x has appeared yesterday on GeekBench with 848 points in the single-core test and 5915 in the multi-core test.

According to vivo’s product manager, the vivo Z5x comes with a 6.53-inch display and its thickness is 8.x mm. In addition, the vivo Z5x uses a punch-hole screen design and this will be the first smartphone from vivo that will use this feature.

Vivo’s latest smartphone is the Vivo Y3. The smartphone was released in May 2019 and it comes with a 6.35-inch touchscreen display with a resolution of 720 pixels by 1544 pixels.