Samsung unveiled the Galaxy M30 back in February with some nice specifications for the budget segment, despite its release in February, it still came with Android 8.1 Oreo and Samsung Experience UI. The Korean firm announced a few time later that whole its Galaxy M series would receive the Android Pie at the beginning of June. All of sudden, some users start to report that their Galaxy M30 units started to receive the latest flavor of Android.

The latest flavor of Android for the M30 carries the M305FDDU1BSEA build serial. The update comes in at 1.14 GB and brings Samsung’s One UI interface alongside with the May 2019 security patch to the entry-level phone. As you’re already used to know, Android Pie brings several goodies to Android, such as more control over notifications, system-wide battery optimizations and more. 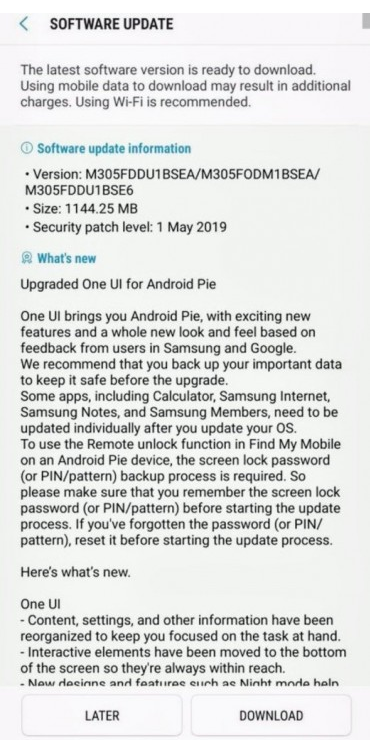 When it comes to One UI, It’s Samsung biggest overhaul on its design language, to brings the better experience for its smartphones, that were once plagued by the sluggish TouchWiz. The UI brings a special focus on one hand usability and simplicity. The system brings new routines for Samsung’s Bixby assistant. It does include a System-Wide Dark Mode that delivers a much less eye-straining experience to users, that isn’t happy with all the light on Material Design.

Apparently, the update is being rolled out in batches, so it may take some days to arrive for all eligible Galaxy M30 units. If you’re not a patient person, you can try to force check the update in the Settings menu.

Samsung named the devices that will get One UI 4.1