The Galaxy M40 will be released in India on June 11 at 6 PM local time. The announcement was made via a teaser poster shared by Amazon India. The South-Korean firm will partner with the giant online retailer to seel the new leader for the Galaxy M series. The new handset will complete the group formed by Galaxy M10, M20, and M30.

Worth noting that Galaxy M40 will also be the first handset to sport an Infinity-O display (punch hole) in the affordable M series. All the previous devices released under the M-series came with a notched display, the M40 instead, will use the same solution adopted by Samsung with the premium Galaxy S10-series, with a top-left hole in the display to house the selfie snapper. 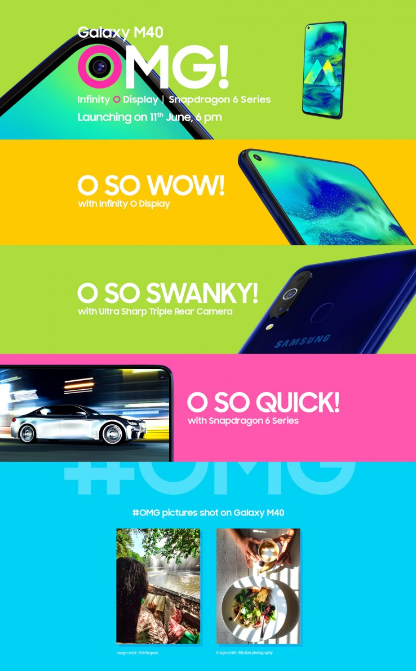 On the back, the M40 will sport a triple-camera setup that seems similar to the one in the M30. The teaser also promises a Snapdragon 6-series chipset running all the tasks. Based on a previously leaked benchmark, we have reasons to believe that it’ll be the Snapdragon 675 an excellent choice for the midrange segment. Furthermore, at least one variant of this device will come with 6GB of RAM and 128GB of Internal expandable storage. Worth noting that’s a first for the M-series since all previous devices came using Exynos chipsets.

Samsung’s Galaxy M-series has been successful in India, becoming the best-selling phones on Amazon.in during February-March period. With the Galaxy M40, the Korean company wants to keep its portfolio of smartphones attractive to India customers. After all, it’s one of the most competitive markets in the world, with many different offers from other giants like Xiaomi.

Next Nokia 9 PureView launch expected in India on June 6