While a proper unveiling has yet to take place,  Amazon has already jumped the guns with Motorola’s upcoming Moto Z4 as it already started selling the upcoming devices on its online store. An official unveiling could still be in the pipeline, but ahead of that, the Moto Mod-ready Moto Z4 has surfaced on Geekbench revealing performance level that is well on par with some Snapdragon 675  powered smartphones like the Note 7 Pro from Xiaomi backed Redmi and the A70 from Samsung mobile. 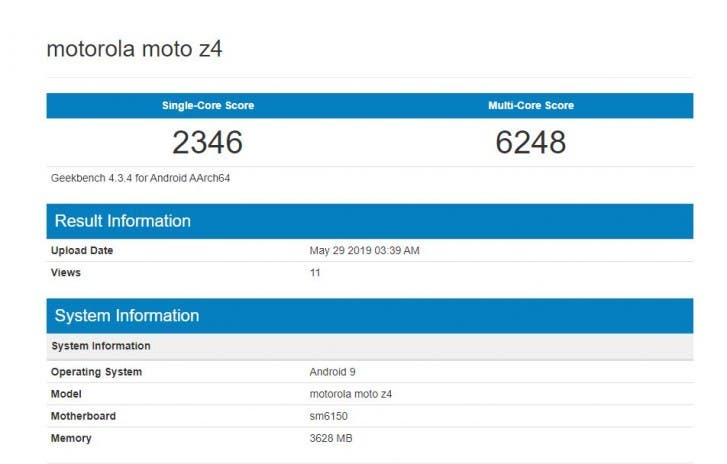 The listing shows the Snapdragon 675  is paired with 4GB of RAM, and on performance basis, the devie returned 2346 points in the single-core test and 6248 in the multi-core segments.  The listing has it that the Moto Z4 will boot Android Pie out of the box, while the listing on Amazon already spilled beans on other hardware details, though the page has since been taken down.

If Amazon’s listing is to be taken for it, the Moto Z4  will come flaunting a 6.4-inch Full Vision OLED display with Full HD + resolution, water-drop notch, and of course an in-display fingerprint reader. Powering the Z4 is Qualcomm’s Snapdragon 675 processor coupled with 4 GB of RAM, and 128 GB of integrated memory expandable up to 2TB, a main 48 megapixel camera (with Quad Pixel technology), a 25 megapixel front camera, a 3,600mAh battery with 15-watt fast charging and Android 9 Pie.

The Moto Z4 as per the listing on Amazon(taken down now) will come with a price tag of $499.99 for the Amazon exclusive version, while the Moto Z4 Force expected to come with the flagship Snapdragon 855 processor and 8GB RAM alongside a triple camera setup could go for as much as $599.99.

Next Redmi K20 Pro spotted on TENAA, might get a variant with 12GB RAM