Xiaomi backed Redmi recently in its attempt to knock down the OnePlus 7 Pro from its inexpensive flagship throne  announced the Flagship Redmi K20 Pro alongside the budget Redmi K20 with top specs that starts at just $360. Well, for those looking for the same device, but with a more juicy internal, you may be in luck as a recent sighting on Chinese certification site TENAA  reveals a listing for the Redmi K20 Pro with up to 12GB RAM.

The phone which was announced in China days ago has the Qualcomm Snapdragon 855 CPU with 6GB RAM and 8GB RAM as the max, but the official TENAA listing has revealed you could get a version of the device with 12GB RAM. Though the listing does not reveal how much of storage space this will get, there is the possibility it could get up to 256GB of expandable space – the same on 8GB RAM variant.

Initially launched in  blue, red, and black color options, the TENAA listing also suggest there are more color options including pink, white, green, purple, and gray color option making a total of  8 color variants. While we are not sure when the 12GB RAM variant will make it to the market, there are speculations the brand could give the variant a different design such as the transparent edition similar to the Xiaomi Mi 9 transparent edition. 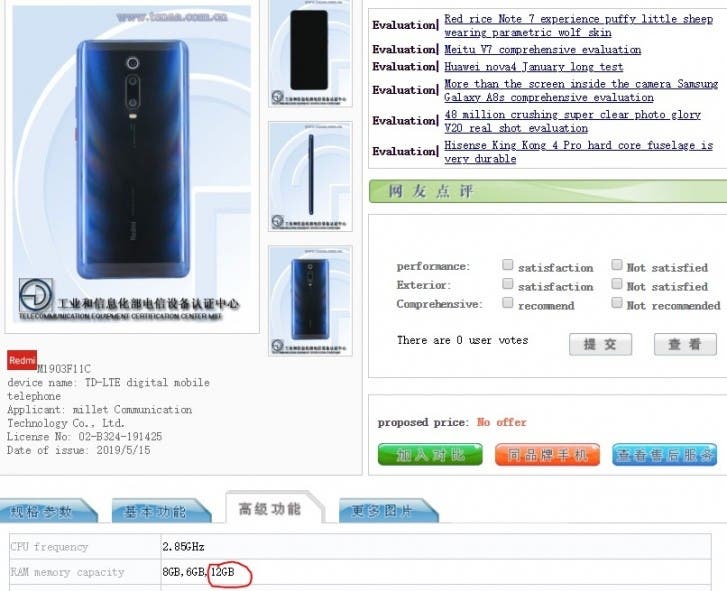 The Redmi K20 Pro has a starting price of $360 for the base version with 6GB of RAM+ 64GB of storage,  $375 for the 6GB/128GB version, while the  8GB+ 128GB and 8GB + 256GB  version go for as much as $400 and $430 respectively. It is so far exclusive to China, with indications that it might launch outside of its home country as the Xiaomi Mi 9T Pro. India could be its first landing point outside China, but could also land in Russia, Thailand as well as Poland in the coming weeks.

Previous Moto Z4 shows up on Geekbench with Snapdragon 675 SoC