Redmi Note 7 has become quite the bestseller in the past weeks and months bringing the 48MP AI main camera to the very mainstream and lower-midrange category. Its dominance is certainly something teasing the other brands and as a response OUKITEL announced their new OUKITEL Y4800 just few days ago. The phone should be also slotted in the $200 price range and today the makers are trying to convince us why it’s the better choice.

Both phones are featuring quite some similar specs like 6,3-inch FHD+ display with waterdrop notch design, but the notch is slightly differently shaped. OUKITEL Y4800 gets a narrower chin, but the looks are pretty much a wash. Both have the similar 48MP+5MP rear camera combo, but Y4800 ups the ante with 16MP selfie shooter instead of just 13MP one. It also brings 6 GB RAM and 128 GB of internal storage, which is also a step up from the Redmi model. You can check the more detailed comparison in the following video.

There are few more differences between OUKITEL Y4800 and Redmi Note 7, some of them pretty minor like the positioning of the 3.5 mm audio jack or LED flash. More importantly Y4800 goes only with the micro-USB port, but at least it’s trying to strike back with an independent microSD card slot in addition to the dual SIM slots. Power-wise it’s also very tight, because Snapdragon 660 and Helio P70 are pretty much comparable so it’s down to personal preference. Same thing with the stock Android 9 and MIUI based on Android 9 Pie. 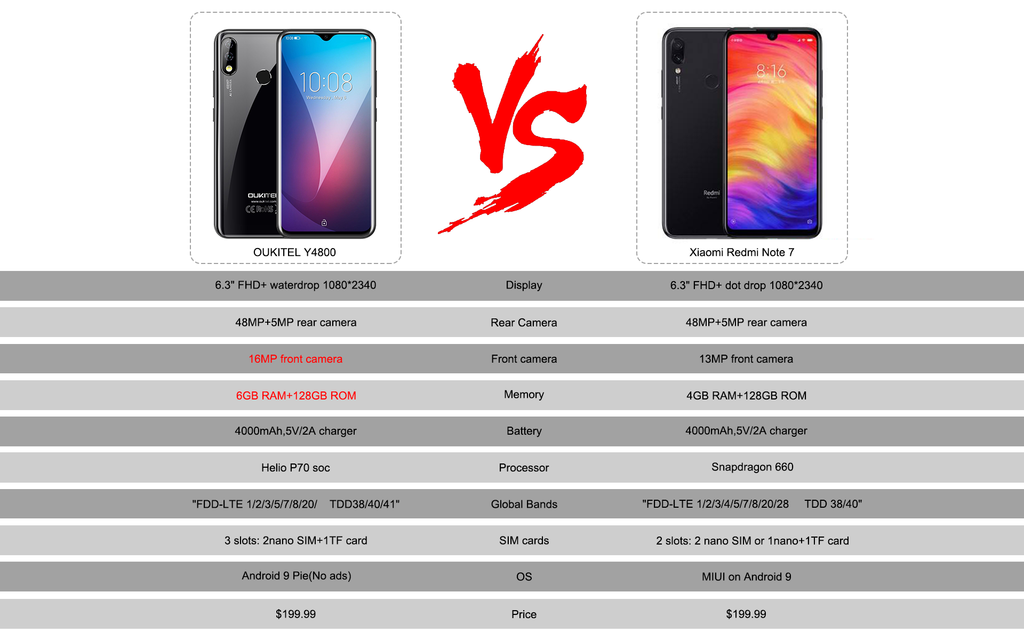 OUKITEL Y4800 will hit the market in the beginning of June and should be priced almost identically to the Redmi Note 7, so around $200. You can find more information about it on their official website. So which one do you think will be the winner ?

Next Moto Z4 shows up on Geekbench with Snapdragon 675 SoC