Samsung has filed an application to register the DeX Live brand in the European Union, a name behind which a wireless version of the DeX software could hide, possibly for the Samsung Galaxy Note 10 and Galaxy Note 10 Pro.

In 2017, the Korean manufacturer has launched its first desktop extension DeX with the Samsung Galaxy S8: it was a solution that included the use of a special dock and that with subsequent smartphones has slightly evolved.

Apparently, the next evolutionary step involves switching to a system without dock or cables, as suggested by the description accompanying the Dex Live trademark registration request: 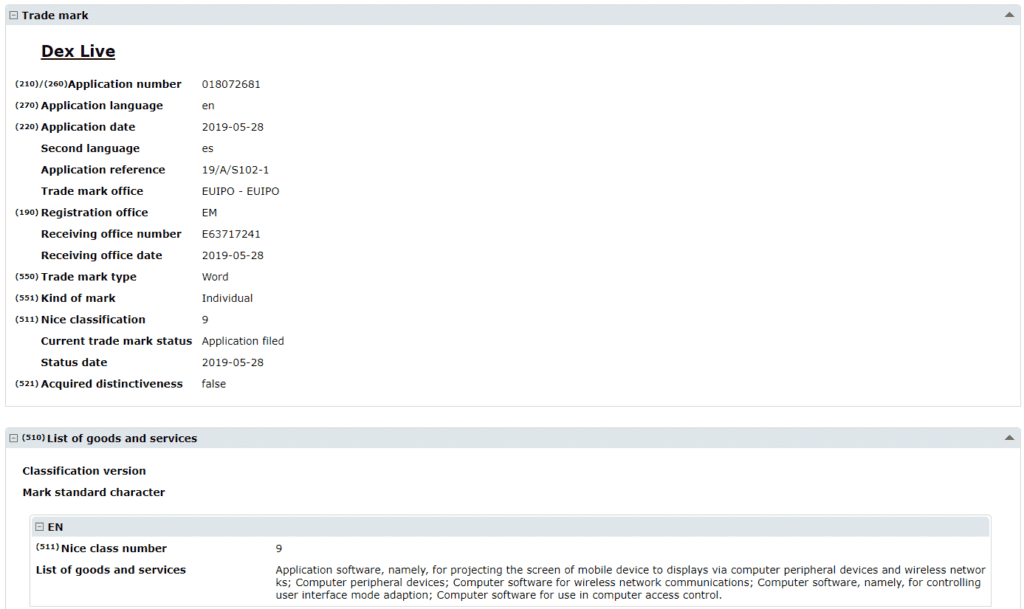 Application software, namely, for projection the screen of a mobile device to displays via computer peripheral devices and wireless networks.

It is worth to mention that we have known for quite sometime now that the Galaxy Note 10 duo will make a move toward the punch-hole design, with the Pro model getting twin front cameras, similar to the Galaxy S10+, while the base model will have a display hole-punch for a single lens. The real design change will perhaps be in the rear camera design, with a likely vertical setup. Now, a new tip from well known tipster Ice Universe (@UniverseIce) has given us a clear hint on what the rear panel may look like.

Unlike the P30 and P30 Pro from rival Huawei, a new render created based on a leaked schematic of the Note10’s purported rear camera arrangement suggest the Note 10 camera arrays will be pushed to one side of the device, and not centrally placed. There are a total of 6 sensors – a pprimary sensor, wide angle sensor, a telefo sensor, ToF camera, a LED flash and flood illuminator.

Previous What Are The Main Differences Between Redmi K20 And K20 Pro?

Next Samsung tries again: new update for the Galaxy S10, hoping it's the "right" one