Yesterday, the new flagship phones in face of the Redmi K20 Pro and K20 were officially released in Beijing, with prices starting at 2,499 yuan ($361) and 1999 yuan ($289). The main difference between the two is that the K20 Pro is equipped with the Snapdragon 855 and the K20 is equipped with the Snapdragon 730. The former supports 27W fast charge, and the latter supports 18W fast charge. The former model comes with a 48MP main lens (IMX586), and the latter is packed with a 48MP main lens (IMX582). Other specifications are basically the same.

Well, the differences between the processor and the fast charging are obvious. But many people are not aware of the difference between the IMX 586 and the IMX 582 lenses. Although both have a 48MP resolution. Today, Lu Weibing, general manager of the Redmi brand, provides more detailed information about two sensors: 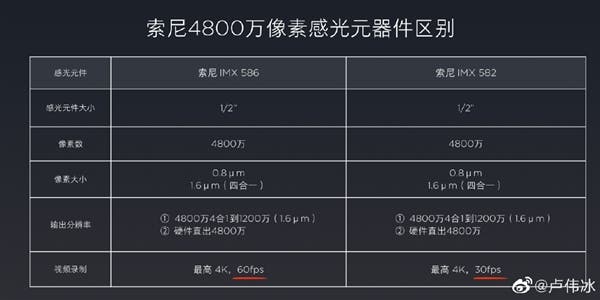 The Redmi K20 main camera uses Sony’s 48MP IMX582 sensor, and many people may have heard of this sensor for the first time. In fact, the IMX 586 used by the IMX582 and Redmi K20 Pro is identical in terms of main specifications:

Both are 1/2″ sensors that support up to 48MP resolution out of the Remosaic hardware and four-in-one 1.6μm large pixels.

So, it can be said that on the Redmi K20, there wouldn’t be any differences even if using the IMX586 sensor.

Next Samsung Galaxy Note 10 may get "DeX Live" feature