Samsung’s Galaxy A80 has been official for a couple of months now but the handset is yet to go on sale in a major market yet. That will change soon as there are more and more signs of the handset being announced on June 15 in India. For one, the Galaxy A80 pre-sale in Vietnam will also commence on June 15. Apart from that, the landing page for the handset has also gone live on Samsung’s India website with a “Notify Me” option. 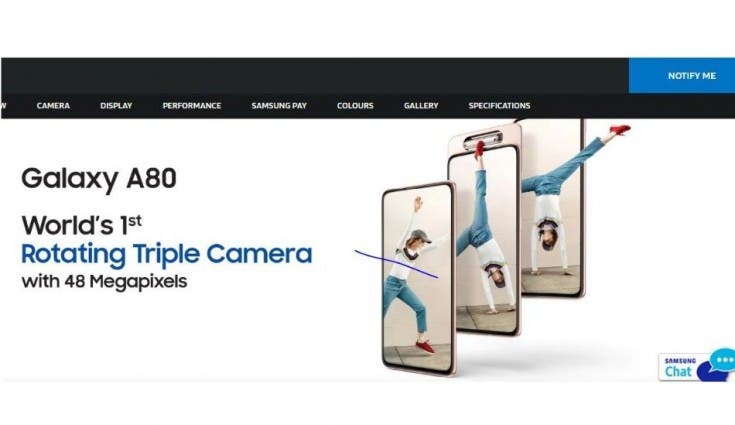 Samsung is also reportedly holding preview events for the handset across India on June 8 and June 9, as per a report by Sammobile. These events will be held in events in Delhi, Mumbai, Bengaluru and Kolkata where fans will be allowed to experience the phone. The events are expected to begin at begin at 6pm IST  and registration for the same can be done via Samsung’s Members app.  That said, Samsung is yet to issue an official launch date for the handset but that should happen soon.

Obviously, the star of the show will be the swivelling camera unit on the top that allows for a true full-screen design. The units include a 48MP f/2.0 sensor and an 8MP wide angle lens along with a TOF sensor that will do double duty as front-facing cameras as well.  The pricing is also reportedly going to be aggressive as the base model will reportedly be priced at ₹39,990 (~$580).