Today, a Nokia executive, Juho Sarvikas, took to his official Twitter handle to announce that the Nokia3 (2017) is now running on Android 9 Pie. He also announced that the company has kept to its promise of providing two years of maintenance for this smartphone. Nokia 3 (2017) was released in 2017 with Nokia 5/6 at MWC 2017. It is an entry-level smartphone which is powered with a MediaTek 6737 quad-core processor coupled with 2GB of RAM and 16GB of internal storage.

The wait is over! Keeping up with our promise of 2 years of Android updates, Nokia 3 (2017) is now officially running on Android 9 Pie! Step up to Nokia smartphones, they Just Keep Getting Better! #GetSmart #Nokiamobile pic.twitter.com/Xz1JXt2Cet

Nokia 3 (2017) was released with Android 7.0 Nougat out-of-the-box but was subsequently upgraded to Android 8.0 and 8.1 Oreo. It is quite impressive that an entry-level smartphone is getting such enormous support. The Android 9 Pie update for Nokia 3 (2017) has the version number V5.120 and comes with May 2019 security patch as well as other features such as system navigation, adaptive battery, and adaptive brightness. As usual, this is an OTA update thus all units will not receive it at the same time. 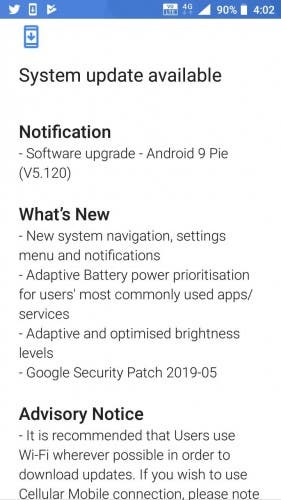 Back in February, HMD Global (the owners of Nokia brand) released the Android 9 Pie update for Nokia 3.1 PPlus while Nokia 3.1 received this update in March. Since the take-over of the Nokia brand by HMD Global, the brand has seen a turnaround and has since released good and competitive smartphones will sufficient software support.