Last week, China’s Ministry of Industry and Information Technology issued 5G licenses to China Mobile, China Telecom, China Unicom and the  Chinese broadcasting and television network. This marks the commercialization of 5G in China. There is no doubt that China will build the world’s largest 5G communication network in the next few years. 5G licensing is also a big event for the smartphone industry because it will greatly promote the development of 5G mobile phones. However, 5G mobile phones need 5G chips. 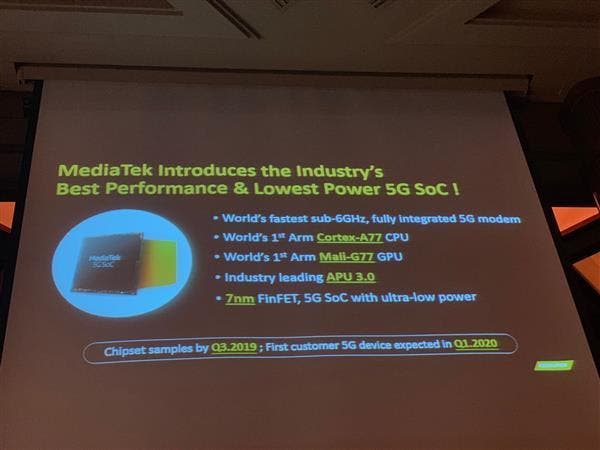 Currently, Qualcomm, Huawei, Samsung, Intel, MediaTek, and Spreadtrum have their respective 5G baseband chips. Nevertheless, the current 5G baseband is external, mainly due to the large scale of the 5G baseband chip. Thus, it is temporarily not suitable for integration into the processor. At today’s MediaTek General Meeting of Shareholders, a representative asked why MediaTek was slower than other manufacturers on the 5G SoC chip development. The chairman of MediaTek, Cai Mingjie, immediately clarified this misunderstanding. He said that MediaTek is the first company in the world to release an independent 5G SoC.

On May 29, MediaTek announced the launch of a multimode 5G SoC chip with a 7nm process and built-in Helio M70 modem independently developed by MediaTek. It uses an energy-saving package. This design is superior to the external 5G baseband chip solution and can be used with lower power. The 5G SoC has a 4.7 Gbps download speed and 2.5 Gbps upload speed. It is applicable to 5G independent and non-independent (SA / NSA) networking architecture and supports 2G to 4G generation connection technology. MediaTek’s latest multimode 5G SoC uses the latest Arm Cortex-A77 CPU and Arm Mali-G77 GPU released by ARM on Monday. ARM said the Cortex-A77’s IPC performance has increased by 20% compared to the Cortex-A76. In machine learning, the Cortex-A77 performs 35 times better than the Cortex-A55. The Mali-G77 GPU uses the latest Valhall architecture with 40% performance improvement, 30% performance density increase and 60% machine performance improvement.