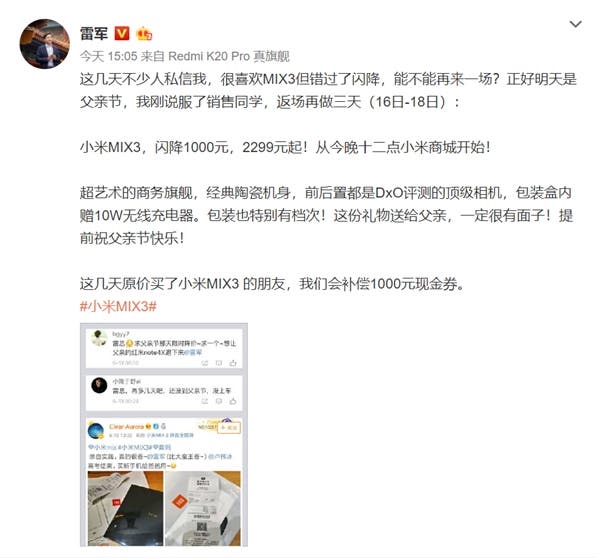 On the afternoon of June 15, the founder, chairman, and CEO of Xiaomi Group said as per netizens request, the company brings this price cut. It coincides with tomorrow’s Father’s Day celebration. This price will be active between June 16 to June 18.

The Xiaomi Mi MIX 3 uses a 6.39-inch magnetic power-slide full-screen, with an aspect ratio of 19.5:9 and the screen ratio reaches 93.4%. It has a display resolution of 2340 × 1080 and the magnetic slide can officially take 300,000 slides. It comes with a Qualcomm Snapdragon 845 SoC and has a 3200 mAh battery capacity. The smartphone uses a 24MP + 2MP dual front cameras and on the rear, it has a 12MP wide-angle (Sony IMX363) + 12MP telephoto dual rare camera. Its camera supports the four-axis optical image stabilization.

According to the official introduction, through a set of two “NdFeB permanent magnets” of the same pole, the slide cover pulls up and down. Officially called “mechanical structure”, this structure has an official service life of up to 300,000 times. However, there are some tests that have proven that it can take as much as 600,000 slides.

This smartphone also has a 5G version which comes with a larger battery and a better SD855 SoC. According to estimates, it will consume 10% more power. Xiaomi said that users can switch between 4G and 5G and while 5G is not active, the power consumption is the same as the 4G version. With the recent commercialization of 5G in China, the 5G version will soon hit the market.