Back on May 6, China-based ZTE announced an ultra-affordable smartphone named the Blade A7. In its mainland, the phone was priced at 599 yuan ($86). Today, it became known this amazing handset is already available in overseas markets. Not surprisingly, in those countries, it costs twice more. Particularly, the A7 has been listed in Latin America, Europe, Asia-Pacific, and other overseas countries, starting at 150 euros. 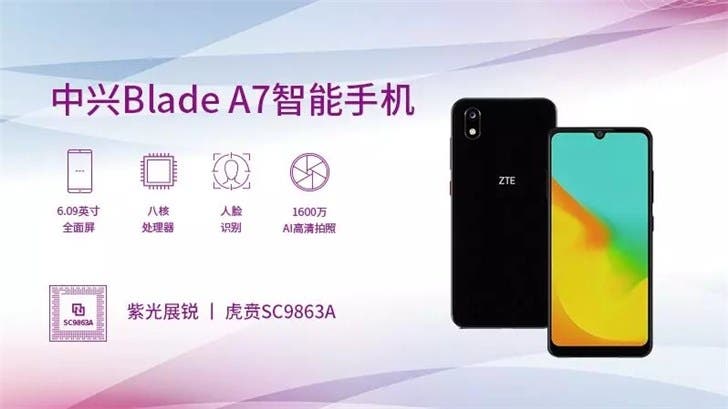 The price is quite low. But it’s also interesting to learn about its selling points in order to understand what we will get for such low pricing. The ZTE Blade A7 sports a 6.09-inch HD+ screen. Under the hood, this phone carries an SC9863A SoC, which has been made for entry-level smartphones mainly. The chip is also paired with a 2GB + 32GB and 3GB + 64GB storage combinations. By the way, it supports both micro SD card slot and 3.5mm audio jack. So the A7 not only makes it easier to use headphones but also allows users to expand the memory.

The rest of the features include an 8MP front-facing camera, a 16MP rear camera, a 2000mAh battery, and Android 9.0 Pie out of the box.

All these specs sound modest but acceptable if taking into consideration the price range. But we are more interested in the chip it is equipped with. The SC9863A is a highly integrated 4G smartphone platform and the first mobile chip to support artificial intelligence applications. It uses an 8-core 1.6 GHz Arm Cortex-A55 processor architecture. Compared to the Arm Cortex-A53, the performance has been increased by 20% and AI processing capacity has been improved by 6 times.

Previous Ren Zhengfei: Huawei's revenue will bounce back in 2021