Xiaomis has just released the Xiaomi Mi 9T in Malaysia, a week after it originally launched in Spain. Retailer Lazada will offer the  6GB/64GB variant from June 25 priced at RM1,199 ($290/€255), while the 128GB variant will go on sale from June via authorized Mi Stores across the country from June 29. Lazada is offering is launch date promo that drops the price of the 64GB variant to RM1,099 ($265/€235).

The device will be rolling out to more countries soon, as the brand today announced the Xiaomi Mi 9T will launch in the Philippines on June 24  via retailer Lazada, though we are not sure of the pricing over there.

The Xiaomi Mi 9T was originally launched in China as the Redmi K20 and is now rolling out to other markets outside of China, and India as the Xiaomi Mi 9T. The Mi 9T Pro also will be launching soon, still as a rebadged Redmi K20 Pro.

Much like the Redmi K20, the Mi 9T has a truly full-screen display with a 6.39in AMOLED panel devoid of a notch, and fitted with a pop-up unit that reveals a 20Mp selfie camera instead. It gets a triple rear camera setup – a 48Mp + 13Mp + 8Mp setup that uses pixel-binning to combine four pixels into one, resulting in 12Mp photos of superior quality. 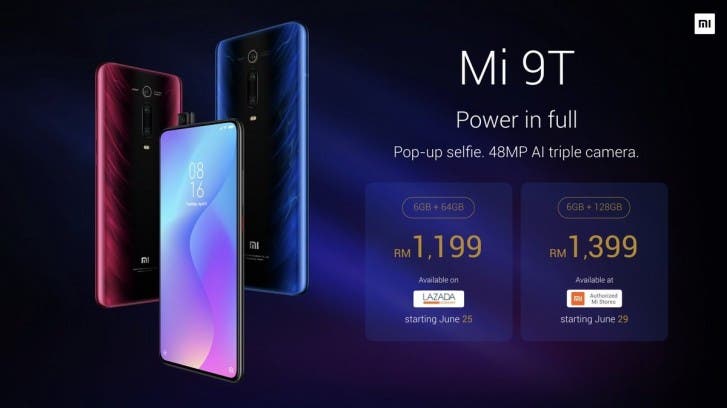