Recently, Huawei asked Verizon, the largest operator in the United States, to pay license fees for more than 230 patent. The total fees eclipsed $1 billion. This incident triggered strong dissatisfaction from US lawmakers and proposed to not recognize Huawei’s patents. However, this incident shows that Huawei’s 5G patents could cause a major upset to the US especially in 5G communication technology.

In terms of the number of patents, China is the world’s largest patent applicant for the communication technology industry. The core patent is the Standard-Essential Patent (SEP) which refers to the inclusion of international standards, national standards, and industry standard. To put it simply, any manufacturer that owns an SPE patent, other companies can’t circumvent the patent. They have to use it and have to pay. Qualcomm earns a lot of money in the 3G and 4G eras because of SEP licensing agreement. Other vendors have to purchase its licenses.

In the 5G era, the patents of Chinese companies are mostly SEP patents. According to IPLytics, a patent analyst, as of March 2019, Chinese manufacturers have applied for 34% of the world’s major 5G patents, South Korea 25%, the United States and Finland each accounting for 14%, Sweden accounting for nearly 8%, and Japan accounting for 5%. Canada, the United Kingdom, and Italy ranked in the top ten, accounting for less than 1%. 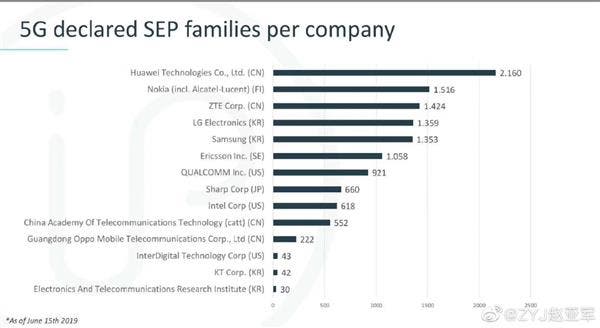 Among them, Huawei has 2,160 5G SEPs, followed by Nokia with 1516 5G SEPs and ZTE with 1424 5G SEPs. The likes of Samsung and LG have declared 1359 & 1353 SEP patents respectively. Ericsson also has 1058 SEP patent statements. The highest ranked American company is Qualcomm and its patents are almost 50% lower than that of third-place ZTE.

Next Here are the 23 smartphones that should receive EMUI 9.1 from June 27th