Despite Google’s recent decision of giving up its tablet lineup. Other companies that use Android still have plans for these larger handsets. Samsung is far from giving up its Galaxy Tab line, and according to a recent leak, there are at least two new devices on the pipeline. With the new devices, seems that Samsung wants to keep good coverage for the low-end and mid-range public.

According to a recent leaked GeekBench Benchmark, Samsung’s mid-tier tablet will runs with the excellent Snapdragon 710. Furthermore, it comes with 64GB of Storage and 4GB of RAM, which is more than decent. The tablet has model number SM-T545 and popped out on Geekbench. Despite the leaked test, there’s no guarantee of its existence or if it will actually be released. 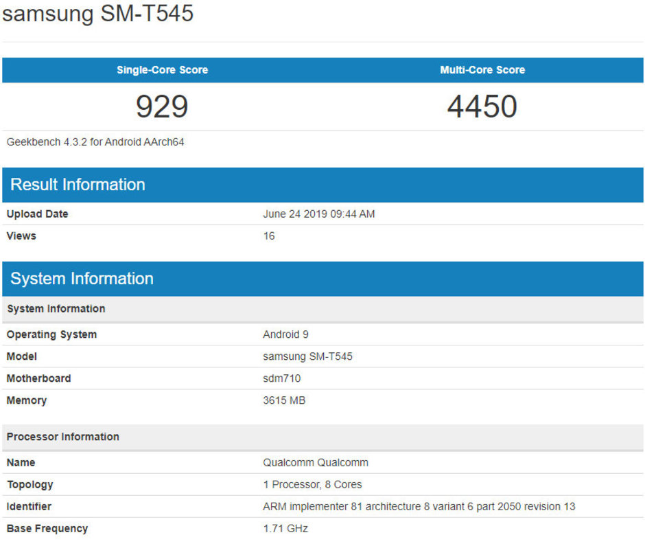 The Benchmark also reveals that the tablet will run Android 9 Pie straight out the box, probably with OneUI running atop. Unfortunately, the benchmark didn’t disclose any details about the device’s battery and display size.

Despite the recent leak, we believe that this device is still some months away from a release. Worth mentioning the high-end tablet the Galaxy Tab S5 is expected for August, coming alongside the Galaxy Note 10. However, we don’t think that Samsung will place the mid-tier and low-end tablets along the premium S5.

Perhaps, the new tablets will arrive at the IFA trade fair in September.