We know it requires huge efforts and financial investment to produce mobile chips. That’s why there are not many companies specializing in this. This market is not saturated like many other niches. We know only a few players, such as Qualcomm, MediaTek, Samsung, Apple, Huawei, and Xiaomi. But many of these companies are using TSMC’s process technologies. So we wonder why this manufacturer doesn’t make its own chips. Seems they have asked this question themselves too. 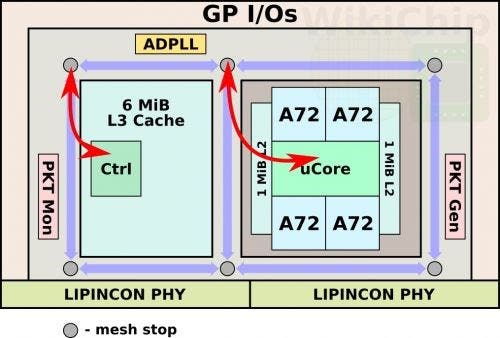 During the VLSI Symposium held in Tokyo, Japan earlier this month, TSMC demonstrated a chipset designed by itself. The chip uses a 7nm process, has dimensions of 4.4×6.2mm (27.28 mm2), uses a CoWos (wafer substrate package), a dual-chip structure, built in four Cortex A72 cores, and many more.

The TSMC chip uses a two-chip design that can be extended by adding an additional PHY. The latter can be interconnected between different cells and different chips. Each chip has 15 metal layers and the mold itself is only 4.4 mm x 6.2 mm (27.28 mm2). TSMC uses four Arm Cortex-A72 cores, operating at turbo frequencies greater than 4GHz. The SoC is equipped with high-performance units (7.5T, 3p + 3n) and custom-designed level 1 cache unit. This module has two L2 cache blocks. Each is 1 MiB. These are implemented using their high current bit cells and run at half speed. In addition, there is a large 6 MiB L3 cache, implemented in high-density bit cells and running at a quarter speed.

At a voltage of 1.20, the Cortex core can reach 4GHz, and the measured maximum speed is 4.2GHz (1.375V). The company said the TSMC chip is designed for high-performance computing platforms, which explains why its frequency is so amazing.

Next Thousands of dangerous Android apps found on the Play Store, some of which are very famous