We already know a small handful of details regarding the upcoming VIVO IQOO Neo. The company has set a July 2nd launch date coupled with its official listing which didn’t reveal any specs info. And now, a new official teaser from the brand’s official Weibo confirms one more essential detail.

As per the teaser on IQOO official Weibo page, the VIVO IQOO Neo will come fitted with a massive a 4,500 mAh battery up from the 4000mAh cell on other versions of the IQOO, while it gets a  22.5W fast charging support as against the 44W on other models.

The IQOO Neo surfaced on VIVO’s official shop yesterday, although with no specs details. The biggest revelation made the by listing are two renders revealing Purple and Black color variants for the iQOO Neo. The renders essentially confirm that the Neo gets the same design as the VIVO IQO, albeit a different LED flash placement. 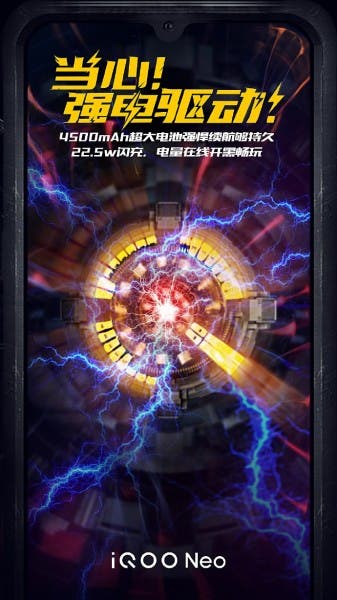 As per TENAA’s listing, the VIVO iQOO Neo will carry last year’s Snapdragon 845 under the hood. Unfortunately the listing doesn’t have the full specs, however, it does suggest the device will have a footprint of 59.53 x 75.23 x 8.13mm, a 6.38-inch display of unknown resolutions. Thankfully, we don’t have to wait much longer for the release.

Previous Honor 10 Lite and 20i are now receiving EMUI 9.1

Next Apple hires an architect who worked at ARM, Intel and AMD