If you are in China or has a contact in the country, then this is probably the best time to get a Xiaomi phone. Two weeks ago, Xiaomi announced that its recent flagship, Xiaomi Mi 9 (6GB+128GB), will sell for 2799 yuan ($404). Now, the company has reactivated the 200 yuan ($29) discount between June 28th to 30th. For those who will like to access this sale, you may want to check Xiaomi Mall or Xiaomi Youpin. 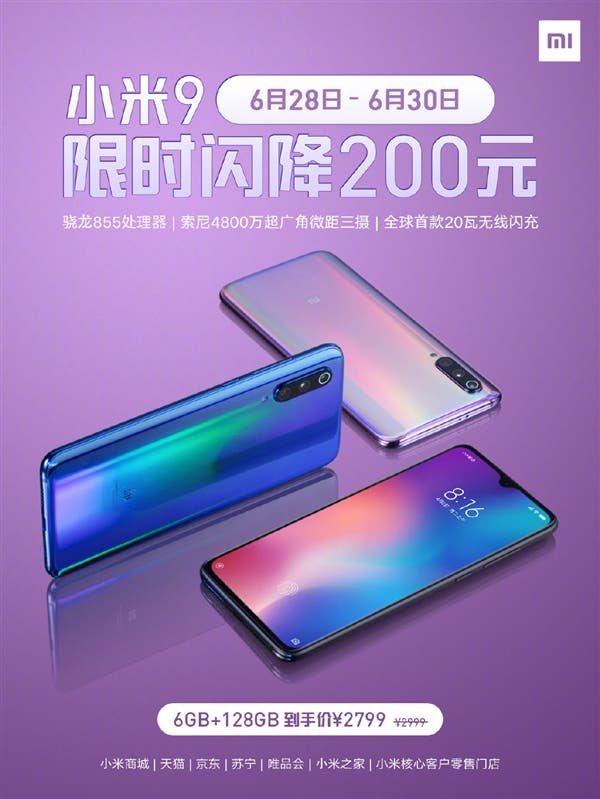 Although 200 yuan ($29) seems small, it is just enough for a smartphone that was released in February this year. This is expected because the company now has newer flagships like the Redmi K20 Pro. The Xiaomi Mi 9 released on February 20th. This smartphone comes with a 6.39-inch Samsung AMOLED screen with a resolution of 2340 x 1080. Under the hood, it has a Qualcomm Snapdragon 855 processor coupled with 6GB/8GB of RAM and up to 256GB of internal storage.

In the camera department, the Xiaomi Mi 9 comes with a triple camera setup which includes a 48MP+12MP+16MP configuration. On the front, it has a 20MP camera. This smartphone comes with a 3300 mAh battery which supports 27W cable and 20W wireless fast charge. The Xiaomi Mi 9 adopts the fifth-generation on-screen fingerprint recognition and face recognition scheme. It also comes with Mi Turbo, Game Turbo, and Dual-Frequency GPS. There are four versions of 6GB+128GB, 8GB+128GB, 8GB+256GB and 12GB+256GB.

In addition, this smartphone comes with a 169 yuan ($25) Xiaomi wireless car charger as a free gift. The Mi 9 hit the market in 2019 with the internal code name is “Battle of the Angels”. According to Xiaomi founder, chairman, and CEO, Lei Jun, this is the best-looking Xiaomi mobile phone to date. It also doubles as one of the most powerful Xiaomi phones.

Next Xiaomi CC9 invites sent out for July 2 launch event